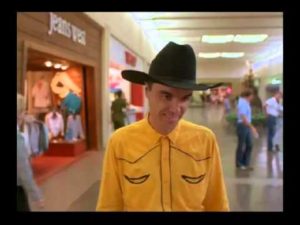 Americana. Collective term for artifacts related to the history, geography, folklore and cultural heritage of the United States of America. David Byrne takes a sardonic eye on the lives of Texans in 1980s US of A! Louis Fyne (John Goodman), starts us off. He is a country and western, clean room technician at Varicorp. He is also a failure at love and life. Next is Civic leader Earl Culver (Spalding Gray). He never speaks to his wife, Kay (Annie McEnroe). Maybe she is unhappy and maybe he is unhappy. Both of them are stuck in this dead end situation. Miss Rollings (Swoosie Kurtz) arrives next. She loves to lay and never leaves her bed, ever. Dont ask or dont think passed that. Mr. Tucker (Pops Staples), is Miss Rollings’ personal assistant. She is a nice as pie, voodoo practitioner.  Louis hires her to help him find love. A conspiracy theorist preacher (John Ingle), blames everyone and conspires taht everything is evil. Though only when it does ill to him. Ramon (Tito Larriva), a Tejano singer who claims to hear tones from people, is another face in the Texas crowd. Finally “The Lying Woman” (Jo Harvey Allen), who recounts fantastic episodes from her life. True or false, they are amazing. 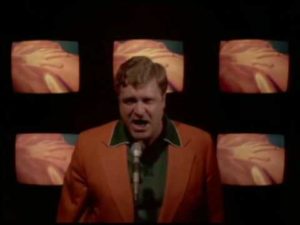 David Byrne had just worked on the live concert film Stop Making Sense, directed by Jonathan Demme. He had a collection of images that reflected America. Stephen Tobolowsky (the famous actor and star of my personal fave SNEAKERS) saw these and was offered a chance to write the script with Beth Henley (Famous playwrite). What they produced is this abstract, surreal and often satirical prod at the America of Reagan, Texas and as the film states, people that made money from oil. There is much more to TRUE STORIES than this. The darkness that was enveloping America was a darkness of post Eisenhower and Kennedy political failures. Lynch for instance assualted the white picket fence of the middle class, Byrne digs at the mentality of conservative America. He might miss the mark sometimes but the mix of artifice, oddity and obscurity add punch to the points. Americana. That is what is being probed here by Bryne. He seems to use the script and then distill out the obscure subtext of everyday images. This makes it visually fascinating. Then the script filters out all of those gems of human interaction and submerged tones. 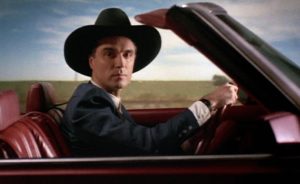 What have Criterion got for us today? New 4K digital transfer. Looks nice but some of the light leak has come back. Its not awful but on smaller screens it is annoying. The CD is great! No Time to Look Back is the best additional piece on the disc. It is frankly brilliant. Take it from me after watching the film, return to this. 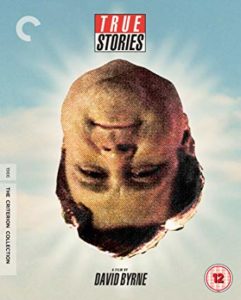