The Town That Dreaded Sundown Review

In a film culture so engrained in remakes, continuations, sequels and franchises, The Town That Dreaded Sundown is a brilliant example of when that culture really works. Bringing together some incredible talent; Town is produced by Ryan Murphy (American Horror Story) and Jason Blum (Insidious, Sinister, Paranormal Activity) and starring Addison Timlin, Veronica Cartwright, Joshua Leonard and Anthony Anderson. Directed by Alfonso Gomez-Rejon (American Horror Story, Me, Earl and The Dying Girl), Town is a welcome addition to the meta meta postmodern love in that horror finds itself revolving around – think Scream meets Halloween and then you are on your way to understanding what you have here.

Most basically described as a meta-remake-sequel (because that seems obvious!), the story picks up in the modern day where school kids watch the original The Town That Dreaded Sundown from 1976 in a romantic drive in. This acts as a type of reminder for the brutal killings that took place in their region of Texarkana years before by the phantom killer, who was never found. Building up as much suspense about the past killings as films like Zodiac, Town looks at the relationships between the teenagers and the older citizens of the town with their own history (a nice nod to Halloween). Quickly, the audience are introduced to Jami (Timlin), who is watching the film with her boyfriend, Corey (Spencer Treat Clark). He notices that she is growing uncomfortable and so decides to drive away to a nearby deserted part of the forest (because this is always the most romantic atmosphere and clearly the safest). They start to do what teenagers do but are disturbed when a masked killer turns up, orders them out the car and keenly slashes Corey to bits before chasing after Jami. He reminds her that “this is for Mary.”

Here begins the new reign of the phantom killer, thirty years later. It is quickly presumed that it can’t be the original killer, who would be too old 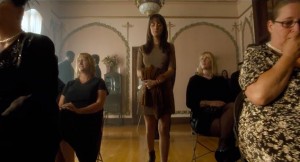 and possibly even dead by now. So what is going on? A copycat? Someone to redeem the past? Everyone around Jami seems to have different thoughts on what is happening. But her grandmother, Lillian (Veronica Cartwright) is mostly just concerned about not getting too involved and making sure that Jami thinks about her future away from Texarkana. Of course that doesn’t happen (what sort of slasher film would this be otherwise?) and Jami becomes obsessed with working out what is happening. She researches the previous spate of killings, grows close to an ex-classmate, Nick Strain (Travis Tope) and ends up with a police escort.

The film plays out as any traditional slasher movie would, playing it’s way down to the final girl trope (famously pointed out in Scream). But what highlights Town above the rest of the current batch of horror movies and recent imaginings of the slasher is the attention to detail. Carefully treading the line between modern day horror and the retro (think 70s/80s), Gomez-Rejon has created one of the funkiest looking pictures in years, illustrating a real throw back to old school horror and adding nods where possible so that the audience become involved with everything. From the awesome visuals (allowing the picture to really bathe in the blacks, greens and beiges), to the costumes, the music and even the way the characters act – all as elements to reminisce. Think The Hitcher on steroids or Halloween with mobile phones; The Town That Dreaded Sundown is very aware of it’s own place within contemporary horror and yet shrugs off that responsibility and just enjoys itself. 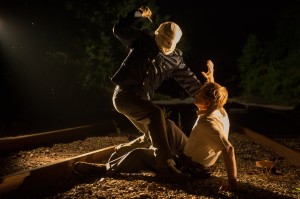 Scary, thrilling and so much fun, The Town That Dreaded Sundown is a great cinematic start for Gomez-Rejon who allows his cast a sense of freedom and self awareness, without taking themselves too seriously (which is often how the best horror films turn out). The story will keep you guessing until the brilliant climax where all the odds are off and the phantom killer comes out of the shadows.