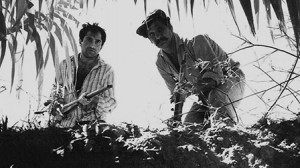 Martin Scorsese Presents: World Cinema Project Volume One, the first in a planned series of releases from Eureka!’s Masters of Cinema label, marks the exciting arrival of the filmmaker’s World Cinema Foundation (WCF) onto UK DVD/BD. The WCF, an initiative set up by Scorsese in 2007, identifies, preserves and restores neglected films from regions of the world otherwise lacking in the financial, technical or governmental infrastructure required of a sustained film culture.

Following Criterion’s similar releases in North America, the Masters of Cinema (MoC) series has compiled for its first World Cinema Project release three recently restored films: Dry Summer (1964), Trances (1981) and Revenge (1989). Hailing from Turkey, Morocco and Kazakhstan respectively, the films are available on Blu-ray for the first time in the UK, and demonstrate such a remarkable and challenging aesthetic range that future MoC entries are wholly welcome.

Dry Summer (Susuz Yaz) is a vivid melodrama about life in a drought-stricken Turkish countryside, characterised by sweeping pans, jump cuts and frequent ellipses. Villainous landowner Osman (Erol Tas) is both jealous of his brother Hasan (Ulvi Dogan), who is keen to marry local beauty Bahar (Hülya Koçyigit), and eager to build a dam that cuts off the water supply to their lowlier neighbours. Tensions are both political and erotic in Metin Erksan’s film, and the heady combination lends a tonally elusive edge. At its centre, Tas is both the film’s distinguishing quality and a slight distraction – too cartoonish for his own good.

Consider the film without as comically caricatured an antagonist – one whose economic greed is less immediately visible – and the imagined result is all the more brutal. As is, Erksan’s film is lyrically strong (its frequent employment of music adds an anecdotal, folkloric charm) but with artistic limitations – what are we to make, for instance, of its prioritisation of a brotherly vengeance over a neighbourly one? The social tensions seem at some point to fall by the wayside here. Though they arm themselves with guns and learn the practical and political benefits of organised struggle, the workers whose water supply Osman cuts off at the beginning of the film are unable to emancipate themselves, requiring Hasan’s return from a lengthy jail sentence to secure the irrigation of their land.

Trances (Transes) was the first film selected by Scorsese as the WCF’s first reissue. Unveiled in its restored form at the 2007 Cannes Film Festival, Ahmed El Maanouni’s documentary, about Moroccan band Nass El Ghiwane, is a highly energetic and aptly-named work that begins with images of a euphoric stadium crowd responding en masse to the polyrhythms of Nass El Ghiwane. As the band’s pace quickens and their volume increases, we see security personnel attempting to qualm the growing excitement. As the performance concludes, an audience member rushes the stage.

El Maanouni’s film makes a case for music at the forefront of any political/emancipatory struggle. As is often the case with films like this, it’s at its best when simply watching the band perform at length – duration becomes an important part of a sustained political energy, because the longer we watch a man hitting drums, the more an apparent disconnect between image and sound seems to occur: the movement becomes involuntary, transcendent. Likewise, those scenes here in which audience members dance as if in a trance show how music in certain contexts facilitates and encourages a social participation while the participant retains complete autonomy. What is a trance-like state if not the separation of mind and body? And here, people dance themselves unconscious – literally.

Ermek Shinarbaev’s Revenge (Mest’) is a visually stunning work. Opening with musings on the purpose of man himself no less, the film takes place between the 1910s and 1940s in Korea and China. A riff on the corrosive trans-generational effect of vengeance, this curious and casually brutal film wants and has it both ways, having one character declare that “injustice is not fertile soil for poetry” while unfolding as a poetic exploration of a thematic abstract such as injustice. Happiness is denied, of course, and the film’s titled chapters lend a prosaic quality that suggests a moral to be taken away. Whatever, its cinematography (by Sergei Kosmanev) is something to behold.

‘Martin Scorsese Presents: World Cinema Project Volume One’ is available on DVD and Blu-ray from Eureka!’s Masters of Cinema series now. Each film disc includes optional English subtitles and a short introduction by Martin Scorsese. The immaculate HD transfers are all taken from original negatives. The box set is accompanied by an 80-page booklet featuring essays on the films.