The Sun in a Net DVD Review 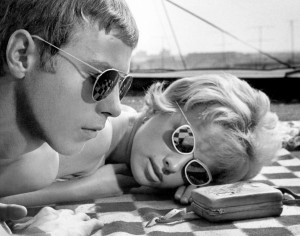 It may have been produced in a country that no longer exists but Czechoslovakia’s new wave and in particular the film that started it all off, The Sun in a Net proves a striking, relevant, provocative and influential cinematic experience. Full of angst and intelligence, The Sun in a Net displays a unique brand of poetic melancholy that can then be found in some of the films to follow in its footsteps. Maybe not the best piece of cinema to come out of the region during this prolific era, but far from looking its age, it reminds us just how potent young and innovative cinema movements can be.

Innovation is key from the off as the noise music that begins the film is more commonly found in modern day Japan. Although not as raucous as its Asian counterpart, it is a jarring and mildly confusing setup. As the camera pans through a busy street we are introduced to the urban jungle of Bratislava. We glide through a forest of television masts to a lone figure on a rooftop, as we are introduced to Fajolo (Marian Bielik). We learn he is a thoughtful yet unfocused young man, trapped amidst the huge concrete blocks of flats that cast shadows across the open areas between them. He goes in search of a defining experience, one that may set him free from the caged darkness, one that he finds in the countryside amongst the hard toiling people who work there. Free from urban pressures his inspired mind finds a liberty that allows him to shake off his frustration and embrace the goodness of some of the people around him. His friendship with hay stacker Blazej (Pavel Chrobak) unlocks a better understanding and fondness for Fayolo’s girlfriend Bela (Jana 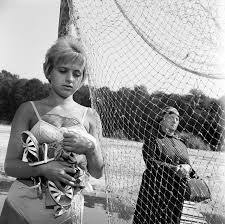 The Sun in a Net is as vivid as it is provocative. Stunning images, freeze frame ponderings, exaggeration of space and reflection with heavy use of mirrors and the constant hum of pop music melds beautifully with the sexual honesty, political sniping and attacking of taboo subjects. A bold mix of scientific dialogue with poeticism allows for the world to seem at once logical and magical. It is a daring and oft too real for the time depiction of many facets of life. Director Stefan Uher deftly extinguishes happiness with melancholy, particularly with the character of Bela’s blind mother. We learn that the darkness in her life extends beyond that in her eyes, but there are rays of hope and happiness offered to her through the eyes of others, even if what she is told isn’t necessarily true.

The frankness of the discussion in this film meant that it did not get the audience it should have on its release. This DVD is the first time it has made it to the shores of the UK. Sexuality, suicide and Bela’s father’s frustration of his blind wife’s situation can all be troubling to watch. The casual way in which temporary workers are used and cast aside also highlights significant problems facing the city dwellers of Slovakia’s capital. The Sun in a Net’s writer Alfonz Bednar has a lot to say about the 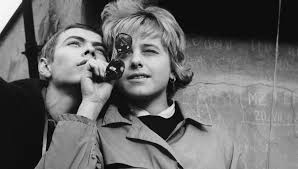 younger generations place in modern society but, being 48 years old himself at the time; he knows how to convey both sides. The older generation look down on the promiscuity and lack of respect displayed by the youngsters in a clever two sided exposition. Combining this with Uher’s love for a striking frame and his fondness for exaggerating sound and light gives the film a unique style that was emulated for years after in the region.

A memorable collusion, Uher and Bednar went on to make two more films together. Bednar’s story is basic but much can be drawn from it. Though many other films copied aspects of this style and embellished them, it is hard not to be impressed by such a simple yet touching story that represents so much about a country and its people.  Uher’s love of mirrors is telling, reflection is key and often seeing things from a different angle proves far more significant.