The Snows of Kilimanjaro Review

The French are famed for their films depicting real-life, dispensing with the saccharine of fiction and exploring topics that can often be troubling such as in Catherine Breillat’s A Ma Soeur! and Phillipe Claudel’s I’ve Loved You So Long. The Snows of Kilimanjaro, based upon Victor Hugo’s poem How Good Are The Poor, injects the real-life with a certain amount of sweet fiction without causing the unflinching nature of French cinema to run for cover. Though solid and unspectacular it does prove that combining tumult with a happy ending can be done in a satisfying and believable way. Take note British film industry. 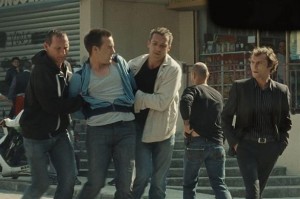 Union chief Michel (Jean-Pierre Daroussin) takes forced redundancy from his work at the dockyard and finds settling into a life of early retirement a rather perplexing feat. His children squabble over his happiness but his wife respects his decision not to remove himself from the ballot when drawing names to assign those who would leave. Friends, family and co-workers hold a grand party for the retired Michel and his wife Marie-Claire (Ariane Ascaride) and present them with tickets for a luxurious trip to Kilimanjaro. They are a cherished part of their community and tears of joy are shed. But not everyone is happy for them; someone is watching them 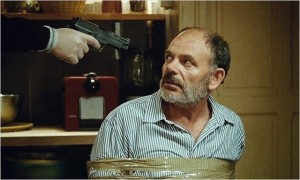 with intent rather than contentment.

Director Robert Guideguian‘s film explores the socio-economic aspects of the forced redundancies. Michel may be middle-class enough to handle his retirement but some of the younger dockworkers are not, forcing them into acts of desperation. After being robbed by someone Michel deduces is a former colleague, he is faced with the moral dilemma of whether or not to turn him in.

The Snows of Kilimanjaro cleverly weaves a whimsical story of an ageing couple getting used to new challenges together with a study of the challenges facing real people in the modern economy. Michel is a ‘have’ that used to be a ‘have not’ so experiences an understanding as to the actions of the young man, who wishes only to feed his two younger brothers, and a frustration as to the lack understanding the former colleague has for his lofty standing and easy life. Michel begins to question his own bourgeois existence and the psychological devastation that stems from his defencelessness and inability to protect his family. What use are his 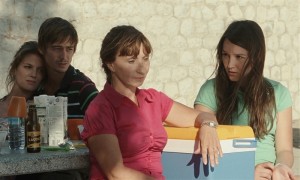 Always interesting but never inspiring, The Snows of Kilimanjaro make for an entertaining watch that doesn’t feel throwaway. The choice of music occasionally makes serious issues feel trifling, in an ill-advised attempt to emulate Aki Kaurismaki’s style, undermining the deeper issues. The story is not anything to write home about but each actor carries their part with poise and an ease that makes for a comfortable cohesion as a community. It is a pure example of a fun film with substance.