Steven Spielberg is a busy man. In between executive producing every third television show and film that comes out of the US, he has found time to direct to huge passion projects in The BFG and Ready Player One. It is a shame that he couldn’t find more time to make The Post the film that it could, perhaps should have been.

Certainly that is the impression the lack of passion on display gives. Spielberg may well have made this while he was waiting for Industrial Light & Magic to finish production on Ready Player One but despite the grandstanding and Hollywood dramatics, it is hard to pinpoint a soul within this film. Whether it is the script or the sedentary direction, The Post tries to say many things, but ends up saying little if anything interesting or new about this well worn path.

Though there are moments of quickened pace and heightened tensions, the kind which Spielberg has become synonymous with, the ticking clock set early in the film never feels likely to ring before the heroes complete their mission. While those familiar with the story of The Washington Post’s brave expose of documents covering up government secrets regarding the failing war in Vietnam know the destination of the story, there is little danger conveyed. Careers are being risked, certainly both the newspaper’s proprietor Katharine Graham (Meryl Streep) and the bullish editor Ben Bradlee (Tom Hanks) put their futures on the line but that sense of impending annihilation that those two bold souls must have felt is absent. 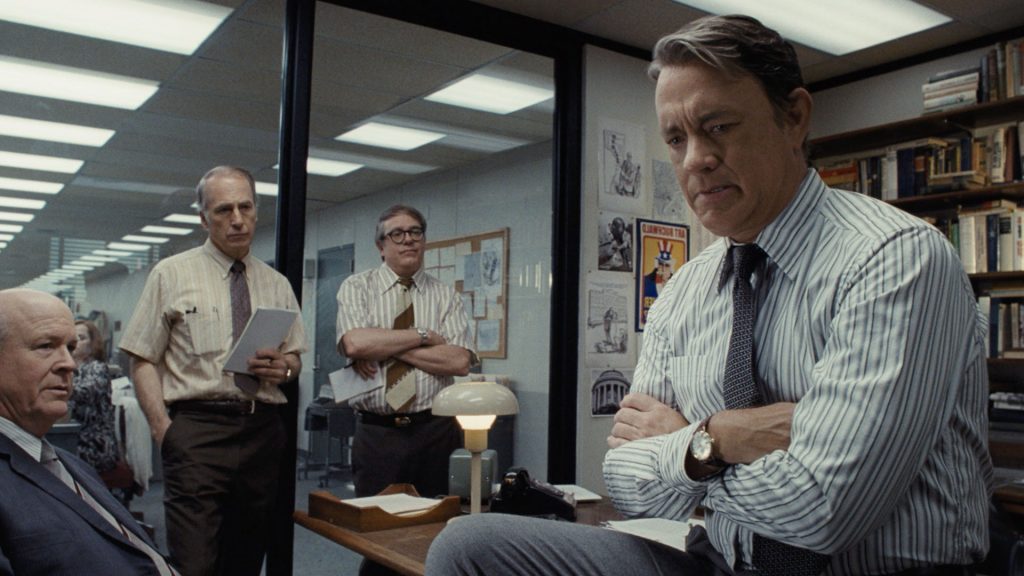 The film begins with a report being typed frantically in the field by military analyst Daniel Ellsberg (Matthew Rhys). As we watch the report leaving the battlefield, Spielberg and composer John Williams conjure cinematic tremors, there is a sense that the ripple effect of this document being released could be cataclysmic. This is where any sense of suspense ends.

What we are then left with is script with all the subtlety of a sledgehammer and a rich ensemble cast that is almost entirely neglected. Bob Odenkirk gets a bit more screen time than most, but the likes of Carrie Coon, Tracey Letts, Sarah Paulson, Bruce Greenwood and Jessie Plemmons are criminally underused.

Evidently this is to allow more time for those sweeping moments of melodramatic release we have all come to admire in Spielberg’s work, but which are used all to frequently with no heft in The Post. The benching of the support cast also allow more time for the star attractions, Tom Hanks and Meryl Streep to do their thing. While Hanks struggles to find his way as the cantankerous, forthright editor of the paper, no amount of affected gravelly voice, hands on hips, feet on desks and arm crossing can allow him to look like the right choice for this roll, Streep is given little to get her teeth into.

In another world, a more interesting world, this film is entirely about Katharine Graham. The burden forced upon her by her husband’s untimely death was great. Running a newspaper, a man’s game, she was embattled by the board and turned regularly to family friends for guidance, often to be mansplained on how best to do her job. Despite this she carried herself with grace and determination and in the end, she does the noble thing and is vindicated by the response. 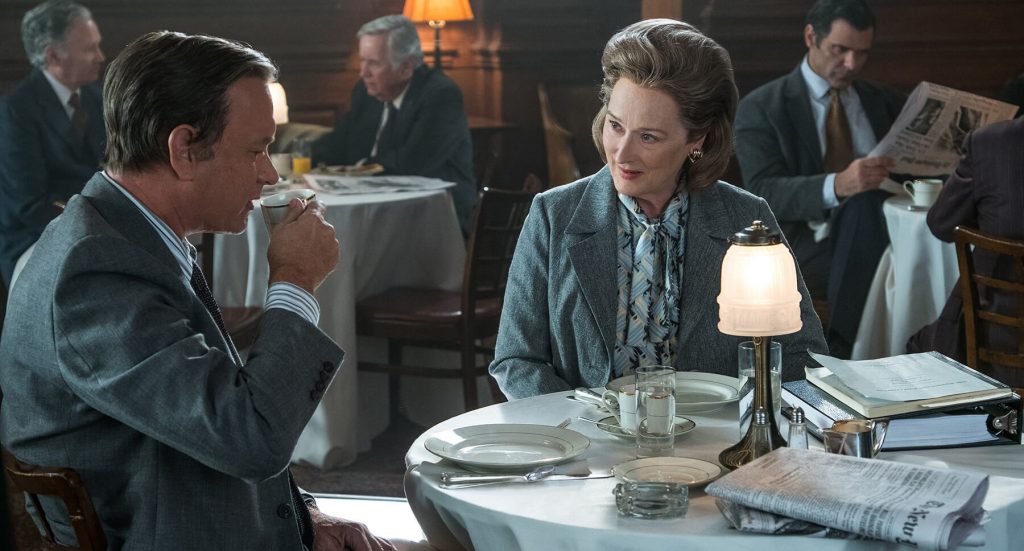 Streep effortlessly conveys the anxiety, the helplessness but also the strength of character required of this iconic woman, yet she is mainly allowed this in a series of the aforementioned grand moments, Hollywood close-ups, high pressure in richly wood-panelled meeting rooms or under the spotlights of the papers offices. What a film this could have been had Streep been allowed to flex her acting muscles and develop the character further.

In place of strong characterisation, the script explains to us that this is a hard situation for a women in this era. Through endless asides, crowbarred into the action, we are left in no doubt that Katharine’s position is all the harder due to her gender but the woman are behind her, they want her to succeed for them all. This much it is impossible to miss, though this in no way is the main theme of the film.

Ostensibly The Post is about a threat to the freedom of the press but even this is left touched upon only lightly. There is a lot of pomp and explanation of the circumstances which face the intrepid press but there is little humanity. Danger is talked about in serious tones but never allowed to seep into the action. The aforementioned lack of passion is most salient when considering the impact of press censorship, something that runs deep in the core of our democracy, something that particularly with the Vietnamese War, was genuinely threatened in the United States.

In the end The Post ends up feeling stale, standing on similar ground to that of Alan J. Pakula’s magnificent All the President’s Men, with Spielberg even inadvisedly giving a nod to the next Washington Post expose. A passionless affair, with some profoundly missed opportunities, perhaps it is not the best move to remind your departing audience of a superior work as your film fades to its credits.