The Parkinsons : A Long Way To Nowhere DVD Review 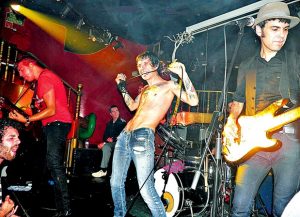 Post – Post Punk was a thing. After the arse end of Brit pop and just before the beginning of fart smelling, crusty ear drizzle. Along comes the Parkinsons. From Portugal they dreamed of assaulting many sacred cows. Bland ear flatulence was replaced by loud, sexy and angry sounds. Lead singer Afonso Pinto, Victor Sliveria lead guitarist and rampaged, Bass player Pedro Chau came to London in search of rebellion.  After meeting Chris Low, who became drummer and inspiration, they unleashed a frenzied response to music. 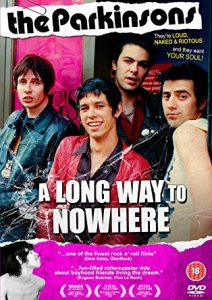 The skill of a documentary can be summed up in one phrase. ‘Translate’. In the world of musical documentary that are ‘fly on the wall’ it would be say the ability to translate the frenetic energy that pulls a group into a planetary orbit. To capture the sense of exception and revolution they imparted. To navigate and not only quantify the bands contribution to a moment. Does this happen with The Parkinson’s Long Way to Nowhere? Well being seven years in the making, you expect something substantial. By using hundreds of hours of footage from gigs, sessions, meetings and drinkings it almost does what you hope. The Parkinson’s (who took their name from the disease no less) kinetic ability in writing is translated. We feel the words and mirrored in music the angst. We note their sparking resistance to the ordinary and the dreary. Also translated is that riotous performance. They set fire to sound waves and detonated a bomb under speakers when they play. 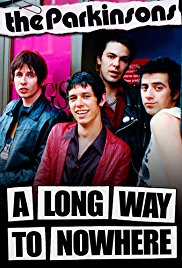 Where the film falls down is that it wanders. It lacks the hone of either a simple exposition or a life capture. It wants its cake and it wants to eat it all. This is not to say it is terrible, far from it. It is that the director Caroline Richards (editor of many documentaries past) has failed in tightening up the ship. One point however is that this will not lessen the work for many. Fans will love it and music documentary fans will too.

A – A fan or B – love live music. The Full set of the band in Fuji is like attending a riot and then having it stop only to then have a civil war break out!