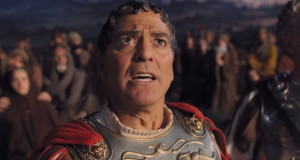 Loaded with a big name cast hamming it up to the nines, Joel and Ethan Coen return having shamelessly plumbed and thumbed the contents of their contact list to wield some starry-eyed gloss to their affectionate, yet also occasionally cutting, look at the Hollywood machine in the 1950s.

Arriving off the back of their homage to the early 1960s Greenwich Village music scene in Inside Llewyn Davies, the Coens keep their attention focused on an America of yesteryear. Unlike the emotionally resonant works of Todd Haynes in Carol or John Crowley’s Brooklyn, however, this trip back to the 1950s is a colder and more intellectual exercise. That isn’t to say ‘intellectual’ in the highbrow sense, but more of an appeal to the faculties of removed, observant recognition than a hearty tug at the tear ducts.

Matters focus on Capitol film studio fixer, Edward Mannix (Josh Brolin); a man who cleans up any bother that his employer’s stable may get themselves into. Events unfold over a 27 hour period, opening with a confession to a priest and closing in much the same manner. The supplicatory nature of Mannix in the confession box is at odds with his no-nonsense bravura in his every day role. It is also clear that he only really fears his wife and God. And maybe the former even more than the latter. 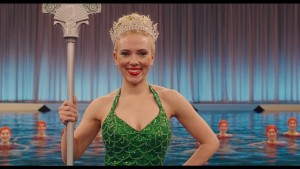 Star of the upcoming film-in-production ‘Hail, Caesar’, Baird Whitlock (George Clooney, teaming up with the Coens for a third time) is a passive puppet to the requirements of his employers. The pampering he receives ensures no questions are asked. But the era demands action, reaction, engagement and involvement. Could Whitlock be stirred into playing his part? Meanwhile, straight-talking starlet, DeeAnna Moran (Scarlet Johansson), is knocked-up out of wedlock. This is a problem that Mannix must sort out.

Although gusto propels all of the performances here into something impressive, special mention must go to Channing Tatum’s tap-dancing, all singing and dancing star, Burt Gurney, and also Tilda Swinton’s double-up as two identical twin sisters (both journalists) in bitter conflict with one another. Playing best when it ducks into episodic flights of retro fancy, the masterful directorial hand of the Coens is never less than a magnetic pull.

Hail Caesar succeeds as a flamboyant, jokey, breezy and spring-stepped treatise on the advent of communism amidst a conservative and venally preoccupied film studio landscape. It fails as an emotionally engaging deliberation on the events, however. That is not to say that this isn’t a more satisfying outing than the aforementioned Inside Llewyn Davies (because it is), but there remains a cool distance to the Coens work that somehow commands undeniable admiration but makes truly loving their output a hard thing to do.

Hail, Caesar was reviewed as part of the Berlinale festival 2016. It will be in UK cinemas from 4th March 2016.