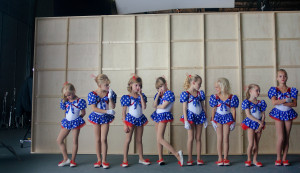 Showcasing an approach that infused Louis Theroux’s My Scientology Movie, Australian filmmaker Kitty Green analyses her subject through a procession of casting calls for a realisation of a crime that shook a small American town twenty years ago and remains unsolved to this very day: the murder of a young beauty pageant queen.

At the scene of the crime, a 3 page ransom note written in paper from the family home and on one of their pens. Many of the local observers pointed the finger at the parents and, in particular, the mother. We learn that a plea in front of the cameras divided opinion at the time. It continues to be the case.

We never see any of the footage. We never see footage of the victim either. Green elects to depict the crime through the multitude of potential actors given the task of resurrecting the events at the heart of the incident. In the process, the casting exercise is able to funnel various opinions to create a kaleidoscopic impression of what happened. It is an exercise in supposition, conjecture and debate rather than a single coherent angle or truth emerging through the muddy waters.

There is no resolution and Green never shows her hand. There is no presentation of her view. It is all left to the audience’s devices to walk away with an opinion. Is the exercise in bad taste? Is this gratuitous when it could provide a better public service? This isn’t Errol Morris in The Thin Blue Line or Nick Broomfield in Tales of the Grim Sleeper. There are troubling questions over the ethics of this film, because it uses a pitiful tale to evoke a documentary making exercise exploring style and form.

At times, riveting, but overall fluctuating in terms of its effectiveness, it appears that Kitty Green simply wanted to make a point about Chinese whispers and how our subjective views are cleaved from our own experiences. A curious film that impresses technically, but lacking that emotional punch.

Casting JonBenet played at the Berlin Film Festival 2017 and will likely be released in the UK later this year.