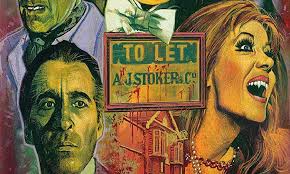 There is a moment in the second story of this portmanteau collection of films from Amicus, that defines the great pleasure derived from it. ‘She’s beautiful, my Salome. You want to touch her. You want to be with her.’ THE HOUSE THAT DRIPPED BLOOD is exactly that. You want to see them, because they are beautifully told tales. All set inside a house on rent from A J Stoker.  A house in which each tenant is befallen with horrible, tragic ends. ‘Its pure Gothic..’ too paraphrase a statement by one of the lady victims of the piece… 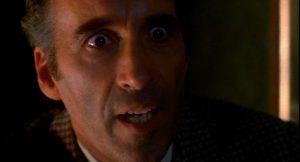 Starring Denholm Elliot, Peter Cushing, Christopher Lee, John Pertwee, Ingrid Pitt among others. We have four stories to delve into. The first sees writer of horror Denholm Elliot and his lady wife, fall under the spell of the house. With murder aplenty. The second sees Peter Cushing falling for a wax model. By way of an axe. The third sees nasty father Christopher Lee and his equally mean daughter. Finally John Pertwee is an actor who is about to go method. Really method. 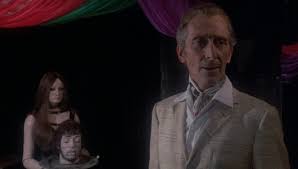 Portmanteau films became stock and trade for Amicus. After DR TERRORS and TORTURE GARDEN became popular in the UK, it was decided to fund THE HOUSE THAT DRIPPED BLOOD, with the same formula. Each story has packaged up within it an infusion of horror literature and convention. Sometimes dark in tone, other times mordant in wit, each story delivers a selection of delights, thanks in part to Robert Bloch (yes of PSYCHO fame no less). Resplendent in location and yet still deceptive. Measured and magnificent. 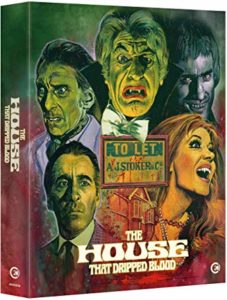 So should you part with your money? Yes. Yes and yes. Its the same Scream Factory transfer. It has very similar features. Its region B coded. Its a no brainer…