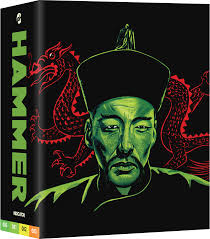 Powerhouse release the third of their Hammer box sets from the Colombia Pictures archive. Titled Blood and Terror, its another essential addition to the series of films. Featuring four films, all of which are exclusive to Blu Ray, two are classic war films and two are classic colonial era horror films. The war films are harder then expected looks at the second war (THE CAMP ON BLOOD ISLAND (Val Guest, 1958) and YESTERDAY’S ENEMY (Val Guest, 1959) and the two colonial era horror films are takes on criminality and mysterious sects in Indian and China (THE STRANGLERS OF BOMBAY (Terence Fisher, 1959) and THE TERROR OF THE TONGS (Anthony Bushell, 1961). This is the seventh set Powerhouse have blessed us with and they have released here, in my very humble opinion, their best yet. Frankly it is simple stunning. Not only because of the films, which vary from excellent to outstanding but it is these exceptional extras that make for a justified investment in the set. Below I will tell you the 3 extras that sell each… 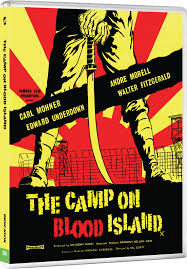 The first film in the set, a version of ‘real life’ stories from the British conflict in East Asia. Focusing on the brutality exercise by Japanese soldiers and the higher command on those held in their POW camps. More histrionics then fact, Camp on Blood Island might still have the power to offend and disturb. Filmed with little varnish, directed with punch and written without an eye for restraint. I would recommend it for the genre fan, Hammer fan and would say to the Woke person reading here, grow up. This is agenda cinema certainly but it is from a time that still remembered events. It also surfaced at the same time as Bridge on the river Kwai…and that won Best Picture.

LIGHT TO DARK – Steve Chibnall explores Val Guest (the films director) from being a jute buyers daughter and wannabe actor, to director par excellence. Chibnall lacks ease in his narration but he has a wealth of information to unpack. RETURN TO BLOOD ISLAND continuity supervisor Renee Ceynne acknowledges how woman shaped Hammers look and their rich roles in film as well as Anthony Hines skill as a producer and writer. THE BRUTAL TRUTH ‘ INSIDE BLOOD ISLAND’ Extraordinary documentary that charts the Hammer war film but has exceptional content from great academics in the field (Jonathan Rigby being my favourite). My only irk is that close up camera, it records the talking head in a way that feels uncomfortable sometimes for the viewer.

War shoot through without the veneer of the Boys Own brigade. It might not sit well for some but this is war as hell and perverse decisions. While watching remember the bombings on Dresden as a concept for attrition. Brutal and bold enough not to pull punches. 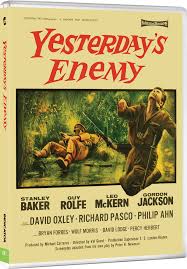 GUADRIAN INTERVIEW WITH VAL GUEST start here. Start here. START HERE! For my money the second best feature in the set and one that is more than just enlightening about this film. Val Guest is probed and pulled, as he begins to talk honestly about how he found film making and what drew him into the subjects he made. Jonathan Rigby is able to extrapolate enough to make Guest almost more considerable a talent then he was. TOTAL WAR INSIDE ‘YESTERDAY ENEMIES’ Sounds a little like a distorted reverb in places but bar this, it is a detailed record of Hammer and Columbia pictures reasons for making the film. Gaining a lot from how the film is compared to its source materials, a play based on a television play. This can be watched in conjugation with three other films in the set. STEPHEN LAWS INTRODUCTION Clocking in at just under 8 minutes, Author Stephen Laws details his opinion on the film. Sounds simple enough but Laws is fresh and fantastic. He uncovers the films ‘Dark Heart’. He is intelligent enough to detail the whole without it being over burdened.

THE STRANGLERS OF BOMBAY (Terence Fisher, 1959)

More mystic theory and Orientalism, than fact. Stranglers is still a prime piece of cinema for the horror film fan. It might not have aged as well as it should but it is still shocking. With the rise in Hindutva politics currently growing in India, these type of sects and the RSS endorsement of fringe Hinduism, might see it surface.

THE STRANGLERS AND THE CENSOR From the mouth of a former censor. Someone who knows the ground and how it is viewed from afar. This is a fascinating look at censorship by the BBFC and the MPAA. This is the best feature in the set and maybe just because I love censorship history! Taking in ratings and reasons for, cuts in Stranglers and wider 50s cinema censorship landscape. THE VERSIONS The comparisons of scenes open them up to the mentality of the various censorship (they were and are, don’t let their names fool you!) We see how violence is okay by the MPAA but not sex. With the BBFC it is the reverse. They were more accepting of sexuality but not of violence. MPAA also were not big on female sexuality. RITUAL MURDER Where Kenneth Hyman gained inspiration for the film. History, Colonial History and Brutality. Its fantastic but I wished that it had maybe reflected on how Sir Alexander Korda did the reverse and looked at British History as idealism and Britishness as key.

THE TERROR OF THE TONGS (Anthony Bushell, 1961)

Feeling like a mob film that mixes history with sensationalism. Its not always well written or directed but it is packed to the brim with action. Christopher Lee is key here to how the film rolls together. He is the master at the heart of the Tongs menace. Murder, drugs, gambling and sex. He has the presence to pull it off. This is often the reason for Hammer films power. In Terror of the Tongs it is its heart. 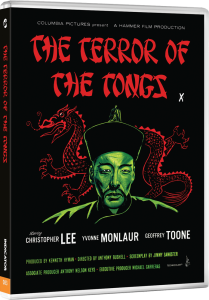 HAMMER AND TONGS Delightful jaunt (I use this word for its Britishness) through James Bernard and the soundscape of the film. Its fun, joyful and insightful. The black keys give us the Oriental sound of the picture outside of any instruments from the region. The composer is never given as much level of consideration as they are here. This is an activist dream. AUDIO COMMENTARY This is quite a treat. Marcus Hearn puts questions to Chris Barnes (Editor) and Jimmy Sangster (Writer). Sangster gets a lot of focus in many other works but I really enjoyed Barnes. His stories are filled with interesting points. The one about Robert Aldrich exposes the difference between British and American productions. HAMMER WOMEN : YVONNE MONLAUR  There is a whole selection of Hammer Women films in the set. All are excellent but for me I loved this because of Monlaur. Laura Mayne should also be credited with getting the woman from the actress. She engages a very interesting life with notes on her personality and wit.