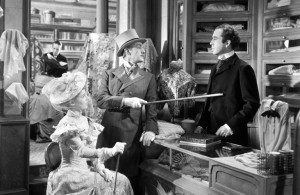 If anyone were to create an argument about whether America or Britain has produced the best comedy in cinema, the case for the States would be a strong one: Airplane, Hal Ashby, Woody Allen and, erm, Hot Rod, would fly the Stars and Stripes proudly. Any argument you may form in this hypothetical, pointless discussion to claim the US has made the best comedy, however, could be undone by one word: Ealing. Before even mentioning the Cornetto films, Monty Python or Lesbian Vampire Killers, the studio responsible for this delightful trio of films (Kind Hearts and Coronets, The Lavender Hill Mob and The Man in the White Suit) would surely lead the charge for the UK. Not only because the films are hilarious, satirical and dark, but because they are also so very, very British.

Nowhere is this Britishness more emphasised than in the figure of Sir Alec Guinness, the actor who links the three classics chosen for this boxset (The Ladykillers would have been a welcome addition, presumably a Vol 2 is due). This selection of comic masterpieces showcases the range, skill and beautiful restraint of one of the finest actors ever to walk this green and pleasant land. The 1950s were declared to be the decade where ‘we’ve never had it so good,’ but the tastefully bitter satires that Ealing produced hinted at a propensity for violence and madness beneath the genteel, prosperous surface. Nowhere is this dark undercurrent more evident than in Guinness’ performances. Whether as a fusty bureaucrat, an out-of-luck science graduate or as an entire family of aristocrats, he represents figures that are familiar in British culture; the strangeness that lurks beneath the surface of each one is symptomatic of the national condition as a whole. Every subtle smirk, agitated glance and short bursts of restrained anger display the complexity that lies behind the stiff upper lips we Brits are famous for. As someone who only knew him as Obi-Wan Kenobi until I saw Bridge on the River Kwai, each new Guinness film is a revelation in the art of acting.

The Man in the White Suit is perhaps the weakest of the lot, about a college graduate who is researching an unbreakable, unfading, permanently clean fabric that may well put an entire industry out of business. The farce is not quite as brilliantly conceived as the other two, but it is perhaps the film of the three that also has the most to say about the nation, bubbling with anger on every level of the social ladder. The Lavender Hill Mob is a more straightforward tale of a gold heist made up of escalating mishaps, a perfectly pitched comedy where a watertight plan proves to be anything but. The best of the bunch is one of the finest comedies ever made, the exquisite Kind Hearts and Coronets. Decades before Eddie Murphy ruined the idea, here Alec Guinness plays several members of the same aristocratic family as they all get bumped off by an outsider who may have a claim to inherit the family fortune. It’s dark without ever being crass, witty without ever being arch, and ludicrous without ever breaking your willing suspension of disbelief. A world away from dick jokes and schmaltz, Kind Hearts, and Ealing as a whole, is as good as comedy gets.