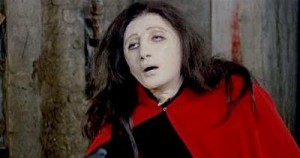 We have two films here tonight…The first The Red Queen Kills 7 Times is a story of two sisters, one naughty the other nice, a legend of a killer red queen who returns to slay 7 times and the secrets of a family legacy. The second film The Night Evelyn Came Out of the Grave sees a sadistic murdering man, his obsession with the woman he loved, a tomb that remains central to his life and all manner of nasty people that surround him in his palatial estate of doom. 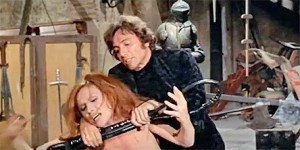 The world of the Gothic giallo has many great films to feast on. The two films here directed by Emilio Miraglia are considered among the best that the sub genre had to offer. They have the usual conventions and genre motifs, death, family feuds, sexual desire, the obsessive desire for the dead, transgressive sexuality and of course gender politics. Both have been admired and endorsed by genre aficionados, with one in particular being an often noted film in the top 10 of the genre. 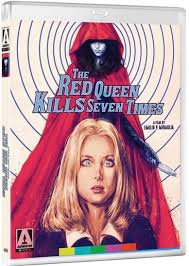 For me this is a tale of two halves. The first half, The Red Queen Kills 7 Times is something that many a giallo fan, will have seen before. It has also been done better before but the film is a very well constructed and intimate piece about the agony of loss and the fear of legacy. That is to say the fear of what is left from a family tragedy for those that feel responsible or were the active agent of the event. The Red Queen Kills 7 Times is well directed, edited and composed but for me the central performances were unbalanced and as always the obsession with extending suspense, in favour of pace and style, dulled the effect. Also hampered by a script that is dull and lifeless, this all adds up to make the film a very worthwhile watch but not a real exploration piece. However the extras are awesome and Alan Jones and Kim Newman commentary, the excellent transfer and the great Thrower piece make it a more fleshed out, if empty (for me at least) piece of cinema. 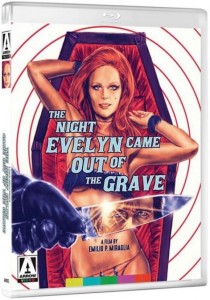 The Night Evelyn Came Out of the Grave however is a masterpiece and one that is near to the best giallo cinema and the genre has to offer. Visually stunning and the new transfer is amazing on blu ray. We get to see a craftsmen compose and paint scenes with a delightful eye for sadistic legacy of the post war heritage in Europe. The film is a deep analytical work about sexual repression, fear and of course guilt. It plays out with the constraints of a thriller but balances the mystery until its final reel. This is giallo films at their best and add in the Gothic tone of the dead and the remorseful husband, it is ambitious. The story is compellingly told with flashes of sexual subversion and sadistic glee that will unsettle. The performers add great tones of pain, passion and even sadism that is hard to replicate with such intelligence and delight but also restraint. Listen to Troy Howarth superb commentary and he draws out many interesting pieces of information. He mines the work for you to enjoy again and again. 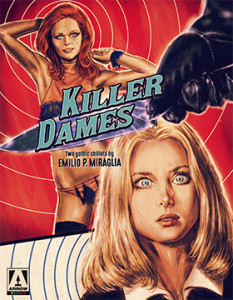 So to the extras and Arrow have out done themselves. The archive features are grand and also well placed to inform the viewer. The commentaries are excellent.  Then you have the great packages and the wonderful written pieces (Kat Ellinger in particulars is a piece of pure excellence) All of which are insightful and expose the films to revealing and intelligent discourse.  All in All Arrow have done it again.

THE NIGHT EVELYN CAME OUT OF THE GRAVE