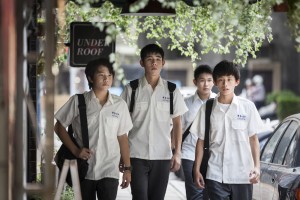 Chih-yen Yee, best known for Blue Gate Crossing, finally returns with Salute Sun Yat Sen; sometimes comedy heist, a sprinkle of coming of age and a whole lot of social commentary. Whilst the audience are expected to know a little history of the Republic of China, for the most part they are taken on a funny, touching and intriguing journey played out by a young and talented cast.

Lefty, a teenage boy who is being hounded at school to make sure that his fees are paid is positive that he is the poorest student at the school (Yee is asking for some suspension of disbelief as the kids in the film seem devoid of parent figures). Day in, day out he is reminded that the school is owed money and because he comes from a poor background he believes that he is destined for something similar – stuck in a cycle that Yee is trying to confront. That is until he finds a bronze statue of Dr. Sun Yat-Sen (a revolutionary, the first president and the founding father of the Republic of China) locked away in a closet on the school grounds. Quickly, along with his friends, they plan to break into the closet, steal the heavy solid statue, move it far away and sell it on. Right away, if one know’s the history of Sun then the thought of being able to sell the man who created the Republic is both interesting, slightly ironic but a definite taste for the way that Salute moves along.

The boys have it all planned out, they have had meetings, drawn out maps and even rehearsed the heist to make sure that not a single step will go wrong. 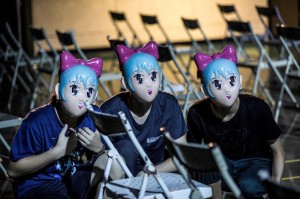 In a way Salute recalls a kind of comedic fun from the Oceans films but at the same time is also knowing that it is trying to make a statement on the social economic issues of young people today as well as looking at the relationships between boys. What Yee does very well with Salute is creating a world that is both important and quirky – speaking a language that younger people will understand about a topic that is highly contested and relevant. But as with these stories, not all goes plan and one night the boys find a pad with very similar drawings to their own. They figure out that Sky, another boy in the class who is also sure he is the poorest and his group of friends are also planning the same heist; to sell the statue and make some money. So with Lefty and Sky confronting one another, nothing goes smoothly and rather than working together, it becomes a race to see who manages the impossible first.

Salute is a charming film that packs a punch; it’s moving, funny and precise with it’s best moments filled with hopefulness and warmth – something that in the hands of another director, it could have lacked.