Win big with STRANGER BY THE LAKE #killertache
Home
News

Win big with STRANGER BY THE LAKE #killertache

do you have a #killertache?

To celebrate the Blu-ray, DVD and On-Demand release of the critically-acclaimed STRANGER BY THE LAKE,Peccadillo Pictures are offering fans of the film to grow, show or display their dangerous moustaches in the vein of Michel’s (Christophe Paou) in the film.

Your moustache could be real or fake, after all, we aren’t all able to grow our very own killer ‘tache for one reason or another! Show off your moustache by uploading your selfie on TWITTER or INSTAGRAM using the hashtag #KillerTache and you could be in with a chance to win some EXCLUSIVE STRANGER BY THE LAKE goodies, including a signed film poster, Blu-ray or DVD with over 2 hours of extra features and some special film merchandise!

STRANGER BY THE LAKE is available on Blu-ray, DVD and On-Demand May 26th

1. Competition is open to worldwide entrants

2. You must be aged 18 or over to take part in this competition

3. The closing date for this competition is Thursday 22nd May at 11.59pm GMT

4. The winner will be picked at random from all entries received on Twitter and Instagram by 22nd May 2014.

5. The winner will be notified within 21 days of the competition end date by either direct message alert on Twitter OR a response on Instagram.

6. If the prize is not claimed within 21 days of Peccadillo notifying the winner, another winner will be drawn and the original prize winner will no longer be considered in the drawer

7. Only one entry per household address is allowed

8. The prize is non-transferable and non-refundable in all instances. 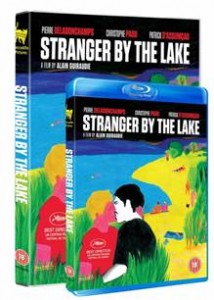 Alain Guiraudie’s atmospheric thriller is set at a beautiful lakeside spot in southern France, frequented by men sunbathing in the summer heat and seeking out anonymous casual encounters in the nearby woods.

Handsome and naïve cruiser Franck comes across Michel, a striking, masculine and moustachioed figure, whilst swimming. He becomes infatuated and must seduce him at any cost. His desire is tested when one night he bears witness to murder and, as a silent witness, must wrestle between his passion and his moral integrity.