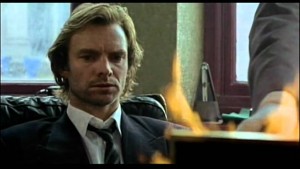 Brendan (Bean) has come to Newcastle for work. He finds that little is on offer but that a local jazz nightclub needs a cleaner. While there he meets the owner Finney (Sting), who has a few odd jobs needed to be dealt with and someone to deal with them. This brings Brendan in touch with Kate (Griffith), an American living in Newcastle who has a ex boyfriend Cosmo (Jones) that is a real problem. Cosmo has the rights to re develop the waterfront and has the muscle to silence anyone that doesn’t like that idea. 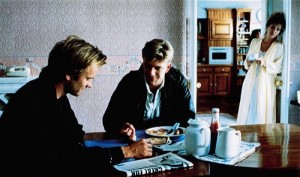 When it comes to British, I often always champion the great films under valued even on these shores. Sometimes however I come across a film that I just don’t get. This is one of those films. Its empty, emotionally redundant and has the narrative ease of a treacle. Director Figgis has the skill of direction he developed later. It lacks definition in performance and visual construction. Here he takes too long with scenes. Captures little detail and lot of dirge. He has the camera pointed but it feels like everything is absent.

Serviced by a mediocre script, we have moderate actors giving very uneven performances. Sting is lumpy at best, Bean has to much youth and too little persona, Griffith was on a losing streak and hits the ground hard here. Its only Jones that gives a rounded performance or at least brings something worth time here. If you want a far more developed, more interesting, better directed film then go and buy RADIO ON. This films lacks so much it is impossible to bother with.