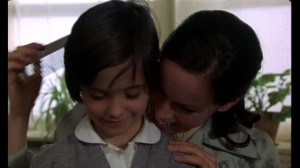 Those who associate Spanish cinema with the post-Franco flamboyance of Pedro Almodovar might be surprised to discover the restrained, gloomy magic of earlier auteurs who worked under the dictatorship such as Victor Erice and Carlos Saura. The latter’s masterpiece Cria Cuervos has been given a stunning blu-ray upgrade by the BFI, which is the perfect opportunity to discover earlier cinema from the Iberian peninsula and to be hypnotised by its murky beauty. It mixes political allegory with family drama, and throws in just the slightest hints of fantasy to make an utterly beguiling film that powerfully captures a landmark moment of Spanish history.

Cria Cuervos is a portrait of a family whose father – an officer in the Spanish army – has just died, leaving the three daughters to live with their mute grandmother and struggling aunt. The focus is on the middle child, Ana (Ana Torrent), who believes she has poisoned her father and sees visions of her mother, as she grows up within this new family dynamic. The film was shot as Spain’s dictator Franco was on his deathbed, so the parent-less family trapped in a large, grim house function as a microcosm of the nation without a leader. The title – taken from the Spanish proverb ‘raise ravens and they will pluck out your eyes – implies a pessimistic prognosis.

Saura, however, doesn’t give a definite answer or a clear prediction of what lies in store for Spain. The authoritarian, blunt leadership of the girls’ father has left a clear impact on them: their playtime is a childish rendition of very adult arguments that they remember between their parents; Ana is obsessed with death and is even driven to kill (or so she thinks). Meanwhile their grandmother is trapped in visions of the past, listening to old music and gazing silently at a wall of photographs. She is unable to leave the past, whilst the girls’ future has been coloured by the broken relationships of the older generation. As the older Ana (played by Geraldine Chaplin who doubles up as the mother) speaks directly to the camera and tells her story, it’s immediately confrontational, as if she is saying to the viewer ‘you made me this way.’ The final shot of the three girls assimilated into society through their school uniform after a summer of rebellion leaves things ambiguous – the lives of these children have been irrevocably changed by their parents’ generation, yet somehow life goes on as normal. In the school yard full of uniformed kids, you wonder how many more ravens there are, waiting to peck out eyes.

What makes Cria Cuervos particularly special, however, is that is functions beautifully as a family story as well as a political allegory, thanks largely to the captivating presence of Ana Torrent. Saura saw her in Victor Erice’s gorgeous 1973 film The Spirit of the Beehive, and caught on to the hypnotic power of her wide, almost black eyes. As she stares into the camera it’s immensely unnerving, her gaze not breaking for an instant, but there’s also a sense that although she watches she doesn’t fully understand, like when she just stands and looks at her mother writhing in agony. She’s a solemn presence, rarely acting like a child and only truly softening when accompanied by the vision of her mother. It’s this relationship that forms the emotional core of the film, and gives it such remarkable potency.

Extras: A short colour booklet comes with the BR/DVD double set that has an essay, a review and profiles of Ana Torrent and Carlos Saura, plus a fascinating interview with the director where he confesses ‘I’m incapable of explaining what I do.’ There’s also an hour long doc on the director and and another interview on the DVD disc.