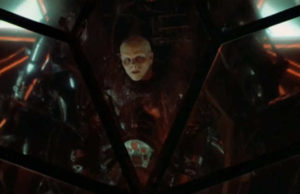 I have to always start these B movie films reviews with a sense of awe. By this I mean that I am awed you dear reader might never have seen these films. From the truly awful B movies to the even more terrible yet truly amazing films. SPACEHUNTER could achieve one or the other. It could be the sort of film that my memories falsely had as one or the other. Maybe it is one that  some how manages to navigate past both of these to become a timeless masterpiece…yeah right. 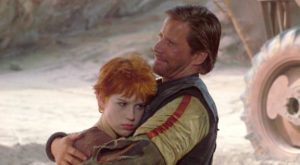 2136. Space has been colonised and Wolff (Peter Strauss), is a man on a mission. He answers a distress signal from Terra Eleven. Three beautiful maidens have crashed on said world and they might not have know it is a plague-ridden hell hole. Worse still they have been kidnapped by henchmen of Overdog (Michael Ironside), half-man/half-machine, all monster. He might have a secret weapon, Niki (Molly Ringwald), a guide and warrior. 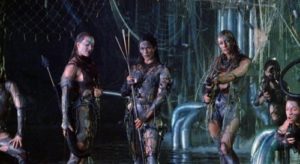 SPACEHUNTER is right up there. Being both truly awful but also truly amazing as well. Packing some stunning ideas about the future (stolen from better written works), piggy backing off of STAR WARS (Jedi released the same year) but some how getting it all wrong and also right. Not hilariously bad. Just a work, with so much potential. One that inspired a thousand kids to leap in the air and zap unseen enemies….