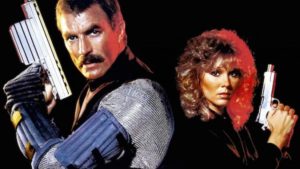 Some 29 years ago, at the tender age of 9, I saw late at night RUNAWAY. A murderous bullet hunting, spider bot assassainating classic. This began a love affair with cinema and science fiction ever since. I suspect it also created a little love of cult, ropey and slightly absurd cinema. It is something to say that I did know Michael Crichton work before this, JURASSIC PARK was about to hit our cinema screens (Explaining why this was shown no doubt). However viewing this lead me to see COMA and then The Andromeda Strain. Two amazing films that develop his science themes (he was a doctor and created ER as well) but also were edgy and timely. After buying the US DVD version of RUNAWAY, I was quietly waiting for a Blu Ray version to come along. Replacing my television memories with cinema quality visuals and sound. 101 Films made my year with this release, it is fair to say! 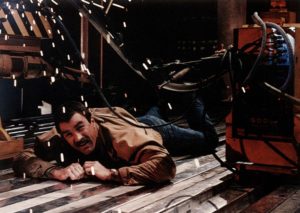 Its the future. Robots are commonplace. They are so common that everyone has one in their home. Sometimes they malfunction but it is so rare that society has taken them to its heart. Sgt. Jack R. Ramsay (Tom Selleck) is a veteran police officer who works in the ”Runaway” squad. He  joined the runaway squad after an incident in which his fear of heights allowed a criminal to escape, resulting in a family’s death at the hands of that escaped criminal. After years on the job, Ramsay has found himself one of the division’s few real experts. Given a new partner Karen Thompson (Cynthia Rhodes) he couldnt be happier or more grizzled. When a murder suggests that a robot has killed —the first robotic homicide on record, he is drawn in. Jack investigation finds a series of strange events. New integrated circuits, dead people hunted by bullets and punctures in the neck. With the devices not hacked, the bots not able to override the urge to kill and the fear of a serial murderer (Gene Simmons) having found the power to control robots, they must hunt him down before it is too late. The problem is, will they be able to stop him before its too late? 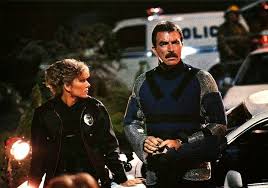 So, RUNAWAY is what it is. This is my way of saying it is a cult sci fi film that has flashy 80s lighting, hair and sex symbols. It also is a pulse pounding masterpiece of tech tension, sexual steam wiping off the window, killer robots and some of the most uncomfortable moments in screen history (if you both hate neck wounds and spiders). I love it. I will not lie. I adore its quirky, campy, over the top atmosphere. I love Gene Simmons as the bad guy. He is mocking, callous and slightly demonic. Sellack is excellent as well. He plays it straight and that is spot on for the audience. Do not get me wrong. The film has its flaws. The editing is sometimes poorly paced and the soundtrack is dull as dishwater. However it looks amazing with a zing and zip on the screen. Then add to that Lyons commentary which is both funny and informative, £12.99 seems a small price for this to be taken home.