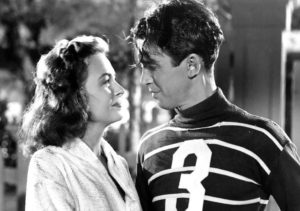 So we are at Christmas again. How do we know this? Not from the obligatory lights. Not from the trees. Not even from the bracing cold. Its from the release of ITS A WONDERFUL LIFE on Blu Ray. The seminal Christmas film that has morphed into a classic movie. Produced and directed by one man award magnet Frank Capra (three Oscars sat on his mantle), it flopped on release but found a home in the hearts of all and sundry. Maybe it is the sentiment it expresses. Focusing on the benefit of thinking about others, working for higher ideals and making life more than just about financial gain.

George Bailey (James Stewart) cant make out how much his life matters. He is on the edge of ruin, on the edge of despair and on the brink of suicide. Angels discuss George and after they see his life in flashback, decide to send help. George is about to jump from a bridge, his guardian angel, Clarence (Henry Travers) shows George what his town would have looked like if it hadn’t been for all his good deeds over the years. 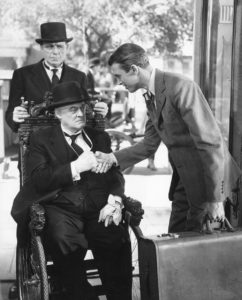 RKO front bench must have hankered after this film. Well only when Frank Capra agreed (with a deal within his own Liberty Films) to helm it. The original script was thrown out and Capra re wrote it. Well actually he worked with writers Frances Goodrich and Albert Hackett, Jo Swerling, Michael Wilson, and Dorothy Parker ( who was brought in to “polish” the script). The result is a gem of the written word. Contorted and captivating. Yes it is anti capitalist (yes but not communism dear Republicans). It challenges the ideal of America greed, with the ideals of Christianity (religion has its good and bad moments…as does everything.) This should not piss off the American right but it will. You know it will. The boldness of discourse here is what makes it radical. Radical and redemptive. Dealing with ideas as defuse as the duality of existence and how you fit into a path, is clever and compassionate. This is key. Brilliantly pointed and a Christmas must… 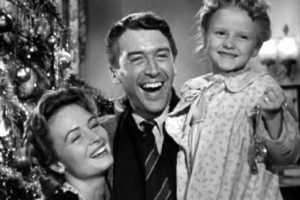 The ‘new’ remaster is average. I say this because it doesn’t loss depth or potency of the blacks. It however adds little new to the piece. Nothing really makes it lift off.

Two documentaries on the film is what you get to chew over. One is good, the other is average filler. So depends on your desire. The extra of interest to me is that behind the scene 8mm film of the cast…