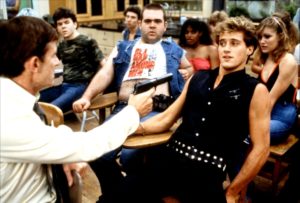 80s High school films never were as politically grim or as vehemently harsh as CLASS OF 1984, which has returned to us thanks to 101 Films. Music teacher Mr  Norris (Perry King) has moved to a new school. Employed after an accident saw the previous teacher leave, he wants to make a difference. Fellow teacher Terry Corrigan (Roddy MacDowell) calls him silly. Norris still has dreams and ambitions.  However a gang of kids have other ideas and make his life hell. He kicks back and sees them punished. Peter Stegman (Timothy Van Pattern) is the leader and has a special loathing for Norris and promises revenge for his bruised pride. How far will this revenge go? 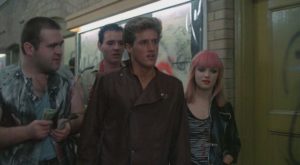 It is uncompromising. It is difficult. It is punk mixed with sleaze, mixed with the perceived rejections of state and society. Screenwriters Tom Holland and John Saxton relished the depths of human awfulness. On first UK release it was slashed by over 4 minutes to please the censor. Now the UK censor is well known for being conservative in its morals and opinions but in truth CLASS OF 1984 is not an easy watch. 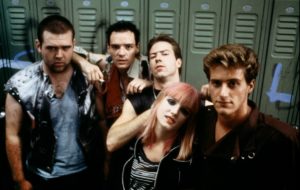 It also didn’t deserve the slices. It now is in a version that runs only 17 seconds short of the uncut version (most that is exercised is the unpleasant rape scene). The director Mark Lester states that this is his preferred version and in my opinion, I would say it plays better than the German uncut release. Its a film ahead of the times it was made in and one that is deeply sunk in its era. So to watch it now is to see the fears of that generation and the ones of ours. The sci fi sequels are more fun but this is a testament to hard cinema…. 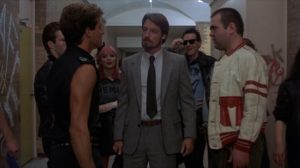 Pictorially, the image is drained and harsh lit. Just as the DOP Albert J. Dunk wanted it. There is a few tears and some print damage but it is minimal. The audio of that superb Lalo Schifrin score is stellar… 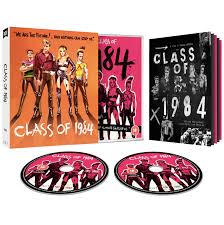 The complaint about economists are that they always say ‘on one hand…’, while correcting that with ‘while on the other…’ Well this disc is a matter of on the one hand you have an essential new extra with screenwriter and plot creator Tom Holland. His interview is not long but is worth listening to for its tidbits on the writing and the translation. On the other hand… Do What You Love, tells us about Perry King. Little about the film…

· Life is Pain… An interview with writer Tom Holland

· Limited edition booklet: Includes ‘Future Retro: The Punk Culture and 1980s SciFi’ by Scott Harrison and ‘And Pain is Everything: An interview with director Mark L. Lester’

· Do What You Love – A career retrospective of Perry King

· Blood and Blackboards – Interviews with cast and crew