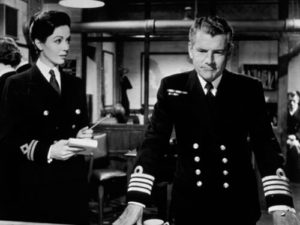 Historically accurate films are not the bed fellow of accuracy. They are often intermixed with cinematic techniques at the cost of truth. The reason is simple enough. An ability to communicate a story cinematically and coherently, often is failed by accuracy and validity. In society, courtrooms are boring and trials are long and mind numbing. Battles in war are often long, sloppy, chaotic and go on for days. So when you come across a film that is able to condense all of this into a propelled narrative, with 3 acts and lots of action, well this is something. SINK THE BISMARK starts in 1941. British convoys are being devestated by German U-boats attacks. If they are successful they will cut off supplies essential for Britain’s war effort. In May, British intelligence discovers THE BISMARK and heavy cruiser Prinz Eugen are about to break out of the Baltic and into the North Atlantic to attack convoys. The man assigned to coordinate the hunt, Captain Jonathan Shepard (Kenneth More), is the Admiralty’s chief of operations. He has also lost his wife in an air raid and the his ship by the German battleship, commanded by Fleet Admiral Günther Lütjens (Karel Štěpánek). 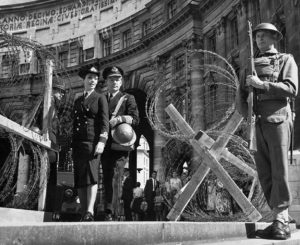 The same man commanding THE BISMARK.

‘War is hell’. That is what the old notion suggests. Well I would say that War films are hellish. They are often constructed by victors. They tell us more of the future of the producing country than the past.  For SINK THE BISMARK it was made at a time of the scrapping of the whole Britiash admiralty fleet. It was percieved as the end of the British empire. Both in terms of as a force of sea power and international influence. This is all handled by Sheldon Hall in his interview. In terms of as a piece of cinema,

I actually would prefer to focus on the ease of film making in the film. The film is more than a tale of Britian standing alone against a mighty enemy and won. Director Lewis Gilbert makes it more than this. Gilbert made his name, with this robust action drama. This also got him the Bond gig. He handles size and scope, special effects and action in one swift movement. Tense action makes way for drama, emotion and taut direction. This holds the tension and the clever interplay between filmed scenes, archive footage and effects. Its excellent.