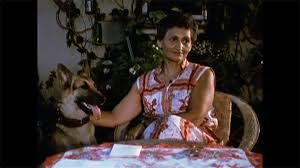 Claude Lanzmann is best known for his 1985 film SHOAH. A stunning documentary about the Holocaust, its legacy and impact. That film ran at nine and a half hours and saw hundreds of hours of footage left on the side. The holocaust would be revisited again by him. A VISITOR FROM THE LIVING (1997) and SOBIBOR, OCTOBER 14th, 4pm (2001) were two films, that saw him reveal the depth and reach of the event. Due to his continued interest Lanzmann went back and finally released other content from the hours of footage captured during the making of SHOAH. 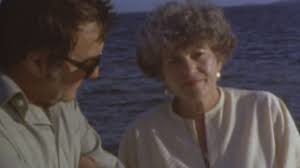 THE FOUR SISTERS (2018) compromises interviews with four women who lived in four different areas from Eastern Europe. All survived the horrors of the holocaust. All witnessed the barbaric machinations of the Third Reich. First person accounts of sadistic, extremist evil that was integral to Fascism. THE HIPPOCRATIC OATH sees Ruth Elias record of Dr. Josef Mengele sadistic experiments on her child in Auschwitz. THE MERRY FLEA documents Ada Lichtman in Sorbibor, a place of horrors to difficult to imagine and escapes that were few.

BALUTY speaks to Paula Biren in the ghetto of Lodz. The stories of survivors are few and hers is one of frankness and pain. Fianlly we have NOAHS ARK and Hanna Marton. She survived on a train that was sent from Germany for money. But what prize for the witnesses. 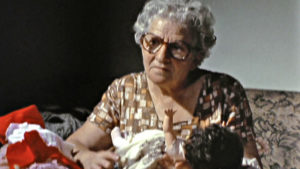 Claude Lanzmann was a gifted at the documentation of truth. He was able to allow width and range to the human in front of his camera. His unblinking eye, ability to gently probe and softly extrapolate. Due to this it is hard to put into words the brilliance of the documentary SHOAH. I can barely find the words to express the power of the awfulness we are hearing unpacked in front of us. Told without restraint via talking heads of those who witnessed it. THE FOUR SISTERS continues along this journey. Along the track of truth, remembrance and horrors that can only be imagined. 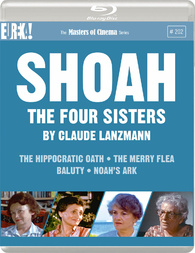 By relating the lives of four women who lived through the Shoah, it could have fallen by being a simple return to the past. However it is in the revealtion of personal accounts and this experience that both more powerful and personal then its predecessor. By also using previous work to underscore its connection to an event, then a series and finally the whole awful tragedy. All four stories are remorseless compelling. By turns upsetting, heart breaking and powerful. The first two films (on disc one) have reach beyond the limits of the screen. However I found Ruth Elias story both despair and remarkable warmth. It is all the more rich because it is not diluted.

SPECIAL FEATURES ON BOTH FORMATS