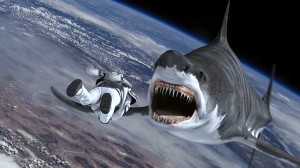 What do you do with a series like Sharknado? It will always have fans that will scream from the rooftops, exclaiming their love for this b-movie franchise and assuring everyone else that Tara Reid has never been better but it will also have its detractors who can’t quite see the point and will never understand what the fans see. Well for clarification, this writer is part of the former group who thinks the series is funny, clever, self aware and completely out of this world. That is why Sharknado 3 is somewhat a let down compared to the previous two in the series. Everything from the script, to the direction just seems flat, and whilst still enjoyable it certainly didn’t have the charm or ironic wit of the others.

Fin (Ian Ziering) has just been awarded a medal of honour from the President of the USA after his work in the previous sharknados that viciously attacked the USA. Of course wherever Fin goes, sharks aren’t that far behind and a sudden storm over Washington DC ends with The White House blowing up. Across the country in Orlando, a pregnant (and armed quite literally with an electric saw) April (Tara Reid) has since got back with Fin and they are having another baby together. Their daughter, Claudia (Ryan Newman) is celebrating her 18th birthday in the Universal theme park whilst pregnant mum hangs back at the hotel. But this time, the unconventional weather isn’t just falling in one part of the country but all over and when a shark turns up in a swimming pool near April’s hotel, she realises that her worst nightmare has returned.

As Fin travels across the country to find his family, he bumps into a familiar face. Nova (Cassie Scerbo) has been tracking the sharp toothed weather along with her aid, Lucas (an enthusiastic Frankie Muniz) and when Lucas gets attacked a la Sin City style, Nova realises that she must save the day again with Fin. The pair fly across the country, nosedive into the water, lose their clothes (I know but keep with it!) before finding April, bumping into Fin’s dad (with a fantastic cameo from the Hoff), flying off into space after a very dramatic moment at NASA and once again saving the day. This doesn’t then prepare you for the massive cliffhangers that flies on screen.

Okay, so whilst it wasn’t the most enjoyable film in the series, it was still pretty enjoyable. Unfortunately the weaknesses felt like laziness, it 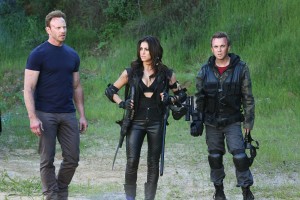 seems that with the popularity of the series, certain aspects decreased in quality. The CGI was awful this time around, with the sharks looking like rubber swimming pool toys and the very obvious green screen moments were garish and ugly. A saving grace was of course the moment in space, which recalled moments from Gravity 😉 (haha!)

It felt like there was less dialogue this time around as well, which was a shame because a charm of the first two was that at the centre was a family in trouble who were working their way out of their drama (and in turn was represented by the danger of the sharks). But this time around there isn’t really a reason to care about Fin and April; they aren’t charming or outrageous, and actually worse than one dimensional. The humour of the films is found in it’s substandardness but if you hide that and substitute that for action and CGI, the issues of the film become clearer than ever before.

Sharknado 3 is fun, just not as much fun as previously. Although it doesn’t mean I am not completely excited for the forth volume!