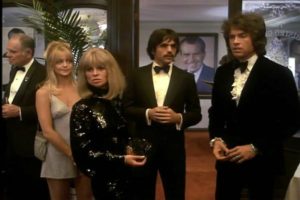 Los Angeles 1968. Nixon is about to win the election for president. Sun and sex are in the air. George (Warren Beatty) is a well known hair dresser, Lothario and wanna be business type. He meets or should I say sleeps with Felicia Karpf (Lee Grant). She has a rich businessman husband, who could fund him. However he has a girlfriend in a love nest called Jackie Shawn (Julie Christie). She was hanging around with George, until that is George met Jill Haynes (Goldie Hawn). Jill wants him to settle down. Settle that is for an ordinary life but George, well George wants a lot more than that! 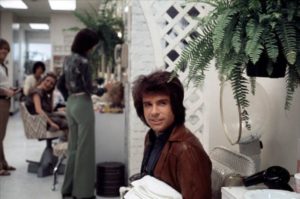 Hal Ashby’s film has been something of a dilemma for me. I first saw it in my 20s and simply did not get it. Its sexual mores and transgressive notes, were easy. However its treatment of Beatty as a sexual champion seemed to massage his ego more then serve the film. Watching it in my late 30s, the film is a different kettle of fish. Its funny, uncomfortably explores political destiny (read Trump here). It transfused one time period and this commentary allows elaborate comments on one era looking at another. All in all, it is timely. Maybe it is even hilariously pertinent for today. Remake? 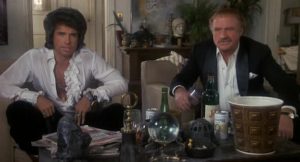 The disc. Well the 4K has flattened out some of the image and equalised the tones. This makes the images occasionally hyper lit and hyper clean. The DVD had a light hue, which was annoying. The Harris and Rich commentary is nowhere near as good as the booklet. This puts political position and commentary into the mix with devastating relish.