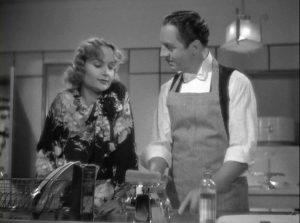 Criterion collection again produce an exceptional release, a classic of cinema and a stand out in the screwball comedy genre.  ‘Lost man’ (William Powell)( a post depression era term for poverty row people.), is stuck on the no mans land of skid row. Skid row houses thousands of people left bankrupt by the depression. He waits to find work. When he is picked up by Irene (Carole Lombard), a New York socialite and party animal, its a recipe for madness. She needs the Lost man to win a prize at the annual rich persons ball. They have a bring and win competition and on the list of things to bring is a lost man. He is aghast at this situation and scolds her for the lack of care or empathy. She decides to make amends and offer him a job as her family butler. He accepts the offer but only to spite her family, who are sniffy about the man and his prospective new role. What will happen when he starts working for these rich, privileged types that know nothing of hard work or poverty? 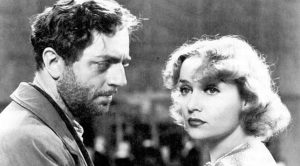 Well its a bonanza month for both film fans and Criterion collectors. With SHAMPOO, RAISIN IN THE SUN, THE UNINVITED and COLD WATER all up next, we are all thrilled. With MY MAN GODFREY they have excelled. The film has been well covered and I can say that I am less of a fan of it on the re-watch. Its social commentary is delightful, both sardonic and cautionary. Sardonic because it unveils the truth of class and the depression. Cautionary because it defines how this event destroyed a generation. 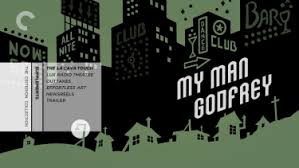 The disc is the real major coup and it is a powerful warrior so I will spend my time on it. The best extra is the radio adaptation. Its actually, in my opinion better than the film. Funny, subversive and just a little bit more machine gun wit. Nick Pinkerton discussion about director Gregory La Cava, reveals a heap of detail about what motivated the man and the film. It also dispels some myths around him. Newsreels from the thirties documenting the class divide during the Great Depression, need to be seen either before the film or straight after. Context aside, the lack of sensationalism is extraordinary.