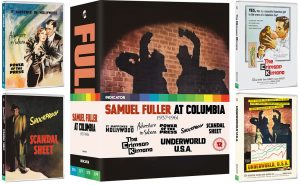 Today is a day like no other for me. I frankly love Powerhouse releases. They care not only for the product that they produce but also the end user who is spending hard earned cash on it. I however am indifferent to Samuel Fuller. Yes he was a poor kid and rose to success. Then he was a newspaperman and street smart but I feel he is the sort of film maker that, though certainly challenged social convention, was not a great or skilled film maker. This is an opinion and one that few share. So when this box set appeared on the horizon, the fan base for both began to stir and I was both excited and perturbed. 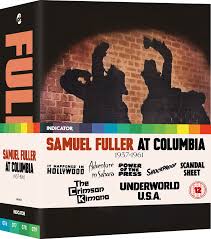 So what did the boxset deliver? Well it delivered Fullers entire output for Colombia, both as a writer and a director. You can guess that from the boxes title, SAMUEL FULLER AT COLUMBIA, 1937-1961. The films in question are IT HAPPENED IN HOLLYWOOD (Harry Lachman, 1937) Hollywood commentary starring Richard Dix. ADVENTURE IN SAHARA (D Ross Lederman, 1938) Foreign Legion drama, POWER OF THE PRESS (Lew Landers, 1943) story of a small town paper man taking on the big city news, SHOCKPROOF (Douglas Sirk, 1949) a parole officer fall for a parolee in this melodrama, SCANDAL SHEET (Phil Karlson, 1952) a film noir about the murder of a woman by an editor, who loves sleaze. THE CRIMSON KIMONO (Samuel Fuller, 1959) race drama about a Japanese man falling for a White woman. UNDERWORLD U.S.A. (Samuel Fuller, 1961) how revenge is bitter and crime is learnt early in life and never forgotten. 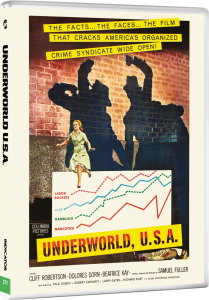 The top Three films in the set might be very telling for you, about me. The best film  is UNDERWORLD U.S.A. Cliff Robertson is spellbinding as a young hood, that after seeing his fathers killers, sets out to get revenge. From prison hood, to police stool and then a tragic end. The transfer alone makes me want to sing. Yes its HD but after seeing an awful transfer of it, you know what is wonderful. The best extra? The Rushes (which is also on the below disc) section of the disc is a fine example of an interview that exposes multiple dimensions. Running at many hours long, Tim Robbins interviews Samuel Fuller and he does the right thing. He lets Fuller talk. When Fuller talks, for instance about shooting another man, it is so telling but also so ripe. You can see it repeated in his films both visually and in his exposition of narrative.

The second film IT HAPPENED IN HOLLYWOOD (Harry Lachman, 1937). Fuller is writing here. Writing about the newly shifting technological frontier in Hollywood. Pre war and post sound, I enjoyed it. Richard Dix plays a former cowboy film star who has fallen on hard times. He is roused by a woman’s love and the fan that travels across the country to his door. Dix is a personal favourite as an actor and maybe this blinded me to the films qualities but it is tender. The best extra? The image gallery 37 pages of stills from the three films on the disc show how promotion then worked. It also allows for more time seeing classic Hollywood at its finest. If you like that thing. 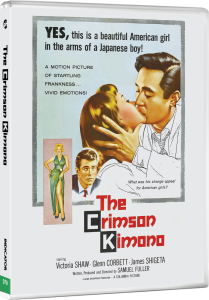 THE CRIMSON KIMONO (Samuel Fuller, 1959) The film takes 40 minutes to come to life but when it does, you feel the political heat and sexual desire. Its bold, frank and sometimes is uncomfortable to watch for both of theses factors. The disc is packed to the rafters with goodness.The best extra? My personal standouts was the documentary on Fuller with familiar faces. It gives an overview of the man and his work. It also does it in a way that layman can watch and enter into his films. It also reflects on the importance of the films and how they challenged the cultural expectations of the time.