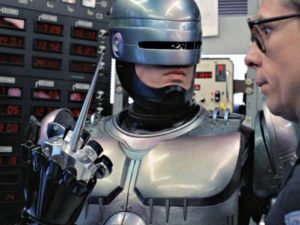 1987 was a myriad year in film. PREDATOR appeared, as did HELLRAISER. FATAL ATTRACTION boiled over and then along came ROBOCOP. All these films were in some way about morality and masculinity. However ROBOCOP was the most unexpected. Coming off the back of a series of machine – man, cyborg films (THE TERMINATOR being the most obvious), it appeared as another attempt to cash in. However the dynamics of good versus evil, humanity in a hulking metal frame and its use of mixed media (TV news in particular) made it stand out.

Alex Murphy (Dr.Peter Weller) is a cop, gunned down in the line of duty. OCP are the private firm running the cops and looking for a new super cop. RoboCop is born. A cyborg made from steel and flesh. However the memory of flesh, cant be stopped by the coldness of steel. Robocop cant escape his past. Or his job to uphold the law. 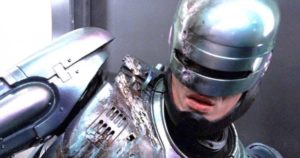 Part Man – Part Machine – All cop. ROBOCOP. I first saw ROBOCOP as a child. When VHS was king and funding new things all the rage. Also censorship was the norm and money was literally everyone’s god. Some 31 years later, some things have changed, others not but ROBOCOP is still a biting satire on everything from consumerism and technology. 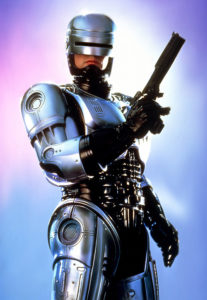 The sardonic intimation of an age of excess is one thing but the relevant notes for the current age is unmissable. From corrupt corporations, privatised social services and dubious military devices. Then the use of media messaging, gentrification and the fine line between good and bad. This is a film with so much to give and so much can be taken from it. Good science fiction asks questions of now and transposes them in the then. Great science fiction blurs the line to enable a diffusion that spares no one. ROBOCOP does this with the vinegar wit of Paul Verhoven. Adding a comic book, genre enveloping shell but never losing the America that is so ripe for the sending up. Or putting down as well… One note as well. ‘The vision that came to me was an overlay of the American Jesus..’ so says Paul Verhoven, the director of ROBOCOP. And well he might be right. Robocop is the future of faith in our being. Via the bots…maybe… 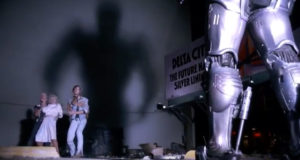 4K restoration from 2013. Looks decidedly nicer now that it has textured the image. Sometimes the frame is a touch flatter than I remember. Possibly because I last saw it when it was on an average DVD that hid this television feel. However the moments it shines (drug lab, OCP, House etc) are very good.

Thankfully Arrow have allowed the piece to breathe. They have focused on details. Filling the set with some of the technical aspects of making the man machine, to the feel of Detroit in the near future. My recommendations are below, however there is a lot to run over. 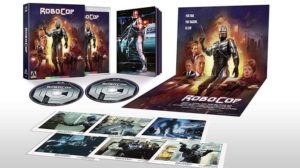 1 – Passing over the already heard commentary, New commentary by film historian Paul M. Sammon is a great place to understand the film from. It is on point and cohesive. Like the excellent ROBODOC that is also worth exploring elsewhere. 2 – Boxed up here are the Theatrical cut and the directors cut versions. The difference is limited but blood splattered.