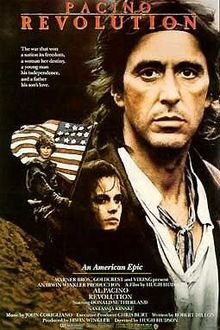 Hugh Hudson (of Chariots of Fire fame) is on career ending form with his film about the American Revolution, charmingly titled: Revolution. The renowned director joins forces with respected screenwriter Robert Dillon to take on the villainous English and tell the tale of Tom Dobb (Al Pacino), whose sole aim is to help his son Ned (Sid Owen, Dexter Fletcher) survive the war. Becoming an unwilling participant, Dobb begins to feel pride in the war effort thanks to wealthy dissident Daisy McConnahay (Natassja Kinski). What unfolds is a pantomime of war. Star-studded it may be but it does the story of the Stars and Stripes no favours.

The famous names will get you through the first 20 minutes, after that you will begin to wonder if it is worth continuing. It isn’t. Early on Annie Lennox provides an indication as to the kind of performances we are to expect. An excellent performer in her own right, subtlety is not her strong suit. She sublimely struts around a concert stage but her presence adds an element of farce to an understated beginning. Lennox is just one of a collection of over the top performances and she is certainly not the worst. Donald Sutherland as English Sgt. Major Peasy is ridiculous in his pomposity and loses any credibility he gained in films such as Nicholas Roeg’s excellent Don’t Look Now. Most of the English soldiers and officers follow his lead with some providing an even more disturbingly camp performance but none of them compares with Mr Pacino’s accent.

Tom Dobb is supposed to be an American frontiersman of Scottish ancestry. Just the idea of Pacino attempting a Scottish accent is enough to make anyone cringe but seeing it, hearing it, is truly excruciating. It’s made all the worse by Pacino’s lacklustre performance, only coming to life in an argument or confrontation. Fortunately his reputation has been saved by subsequent performances in Glengarry Glen Ross, Carlito’s Way and Heat. What his disastrous attempts in Revolution do confirm is that Pacino lacks a range. His talent is redoubtable but straying away from his comfort zone could have proven fatal.

Aspects of the plot and dialogue of Revolution are completely incredulous, insulting the intelligence of anyone who continues past the first few hurdles. Kinski’s wooden performance is plunged into new realms of absurdity during her random meetings throughout the 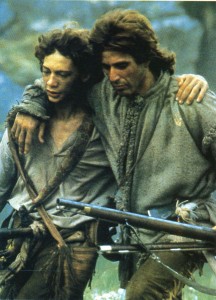 war with Pacino’s Tom Dobb, as if the entire continent of North America is a local bar where everyone knows your name. Kinski is presumably one of the main characters of the film but has very little to say. This goes strikingly unnoticed however in a film where most of the dialogue belongs to Pacino’s preposterous voice-over narration, in which he fluctuates in and out of his ‘Scottish’ accent.

As much as the script and actors let Hudson down, he compounds his own misery with some tragically misguided direction. The American Revolution should have a grandiose feel to it but Hudson’s use of close-up and shaky handheld cameras leaves it small and unimportant. Revolution too often looks like the filming of an expensive re-enactment at a village fair. That Hudson can take such a significant era and demean it so is a traumatising thought, much like Michael Bay’s efforts on Pearl Harbour. “Congress? I’ve heard they fight a lot?” is a line delivered seriously when it should be tongue in cheek, either way the line has no place in a film trying to vitalise the story of the colonists. Hudson has proved he has no place in attempting to make a film of this scale. A magnificent fall from grace for all concerned.

The DVD/Blu-Ray release at least comes with some great additional features to ease your woes. An extensive booklet and documentaries with Hugh Hudson and the explanation behind the directors cut.