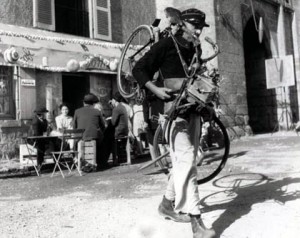 As the BFI release of Jacques Tati’s 1949 film Jour de Fete begins, there is a brief note explaining the colour version and the black and white 1964 reworking of the original that follows it. The film was originally meant to be in colour but the process was too complicated and it ended up as a black and white film, with the colour being added for the first time in 1995. The second black and white version includes additional scenes, hand painted details and English dialogue. Both versions are marked points in film history which fits the bill perfectly as the BFI continues to release films of brilliance and/or historical interest.

Jour de Fete sees inept postal worker Francois (Jacques Tati) impressed by the efficient delivery methods of the US and his misguided attempts to emulate them in his tiny French village. There is a fair in town and some of the cheekier members try to help him on his way with disastrous results. Jour de Fete includes some classic Tati buffoonery as well as his obsessive satirical mocking of all things modern and efficient. It is a tribute to a vanishing way of life in small towns around Europe and the United States.

The trouble with Tati’s slapstick is that it is incredibly old fashioned. Though inventive, it soon becomes tiresome, along with the 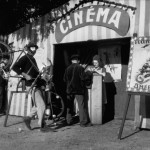 exuberant music that flows with the rhythm of every movement. Playful pokes at the Americans aside, the musical, exaggerated comedy of this madcap circus clown, endlessly riffing on bicycle mishaps is horrendously dated. Tati’s antics can be far more charmingly realised in Sylvain Chomet’s animation The Illusionist (2010). Drawn from Tati’s script, Chomet invigorates the tired charm of an old French master. Although there is much to pay reverence to in Jour de Fete, it may not prove an entirely enjoyable 81 minutes.