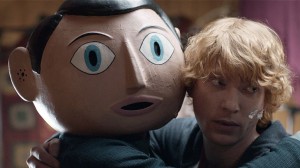 Lenny Abrahamson continues once again to prove that he is one of the most interesting and unique filmmakers to come out of Ireland in the last decade. After last year’s powerful and compelling What Richard Did, he returns with this zany comedy drama, Frank, which takes Abrahamson to another level.

Starring Michael Fassbender, Domhnall Gleeson and Maggie Gyllenhaal, Frank tells the story of Jon (Gleeson) a young musician who is going no where fast so when he encounters a mysterious avant-garde band with a name that no one can pronounce (Soronprfbs), he knows that this is his ticket out of his dreary and boring town. Of course he is replacing the keyboard player who had just tried to commit suicide by running into the water, but Jon doesn’t think too hard about that.

The band is fronted by an enigmatic man known as Frank (Fassbender) who dreams up new notions of how music should be heard, has hopes of being a new visionary for the era and is always seen by everyone wearing a giant helmet (reminiscent of the persona of Frank Sidebottom), through which he performs, talk, eats and drinks. After one concert together, where Jon has very little to do but is completely enthralled by the prospect and madness of this band, they invite Jon to come with them to help create their new album. Whilst he has high hopes for his musical career and assumes the others in the band will listen to his direction, he quickly realises that things don’t always turn out as they are meant to. Along with the rest of his band mates, he ends up staying in a cottage in the middle of nowhere in Ireland, removed from the rest of the world to record this album, which seems like it will actually never happen.

Over a year passes and during that time Jon has been recording the bands writing, practising and recording and slowly building a fan base on YouTube and 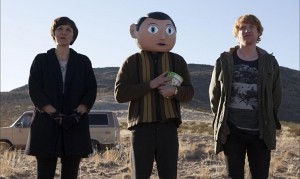 Twitter – getting people interested in what they have to offer. When they receive an invitation to perform at SXSW in Texas, it seems like their fortunes are going to turn around for the better but it seems to only be the beginning of their downfall.

There is no escaping the fact that Frank is a crazy sort of film; going from one extreme to another. Moments of serene quiet, beautiful landscapes and delicate motions are often surrendered to beasts of sounds, manic speech and generally giddiness, which is all part of the fun itself. There are few moments where the audience feel unamused or involved in the story; many will find solace in a character like Jon, who is the perfect everyman. He is innocent and clean, and just trying to find a way out and better his own situation so when it comes around, he grabs hard and lets the journey take him there. 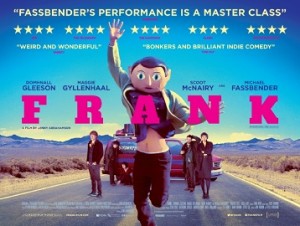 What is most important about Frank is the powerful and often inspiring performances from almost the entire cast; especially the central three – Gleeson who seems to be on the up and rightly so, keeps the audience on his side throughout. He is kind and funny and weird but none of these things are issues, instead he dives head first into the story and doesn’t let the audience go until the very final scene. Often the scenes he does with Fassbender, whose face is little seen under the mask until the final chapter are deep and philosophical, but also very funny and illuminating. Their talks are on a very human level and something most of the audience can appreciate. Fassbender is also just brilliant in the role, the audience forget straight away who is under there and whilst they try to picture him, there is no getting away from the fact that this mysterious man is such a strong character. The third part of the trifecta is the brilliant Maggie Gyllenhaal, who plays Clara, the band’s theremin player. Clara is a bitch, fair and square but a bitch so totally in over her head and in love with Frank that she doesn’t know what to do with herself – it is quite clear that she cares for Frank but it will never happen because they are on two totally different levels and physically, who knows what could happen with Frank and how that would work. But it is the chemistry that Gyllenhaal and Gleeson find, which is so wonderful – they hate each other from the very start and yet the best scene in the whole film is probably in the hot tub when Clara sees Jon’s penis and she literally pounces on him due to some sort of tension between the pair – it’s hilarious and touching!

Frank is fucking mad, it’s wonderful and fabulous, the emotions are tender and the music is magical – it takes the audience away from where they are watching and throws them straight into the middle of this merry band of brothers and sisters. It cements the talent of Abrahamson as a director and someone who knows how to talk to humans and tell their stories.