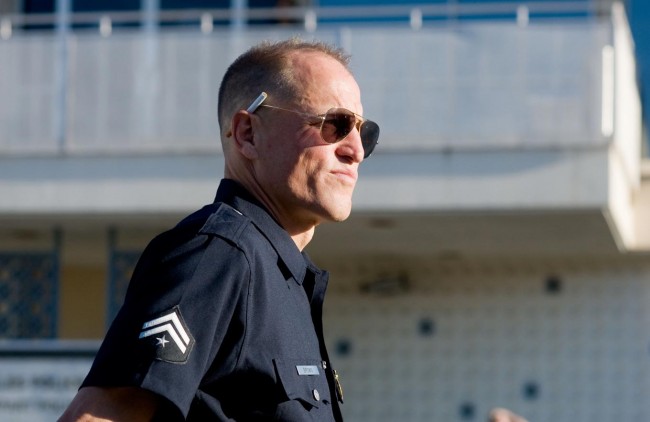 Oren Moverman is the other half of the two young American filmmakers that I see their work no matter what the buzz is. Jeff Nichols of Shotgun Stories and Take Shelter is the other and both have had excellent success working with a particular actor they get the best out of. In Nichols case it is Michael Shannon, a behemoth of talent and force slowly building a star name. Moverman has found his muse in an ageing talent that some might consider to be at least in the autumn of his career. From here though it is hard not to think that Woody Harrelson is in fact in the form of his life and Moverman knows exactly how to use him. Although Rampart never quite feels as emotionally taught as his first effort The Messenger, he gets far more out of Harrelson. Scandal surrounded LAPD cop Dave ‘Date Rape’ Brown may just be the best performance from the former Cheers bartender.

We are introduced to Brown as he berates a young new female officer for not eating her French fries. “If you didn’t want them you shouldn’t have ordered them” he tells the jittery new policewoman. Another cop informs her that Dave doesn’t like wasting food. As Dave drags on a cigarette eyes hidden by huge sunglasses it is hard to gauge his emotions, but this is just how he likes it. He has a stern but vaguely nonchalant demeanour. He is the old school tough guy cop that has become a dinosaur in this age but is also smart enough to engage in the law thoughtfully even though he likes to break it consistently.

The storytelling is deft as nothing is formally explained and the pieces of Brown’s past are assembled from various outlets. He has been part of the Rampart scandal focusing on police brutality in Los Angeles. He was also caught up in a furore which gave him his nickname. Planning a killing of an alleged date rapist, though Brown was never found guilty he would not deny it. His latest may be a step too far after he was caught on camera beating a black suspect after the man crashed his car into Brown’s and made a run for it. Although Brown appears to be the victim in some form of setup, he does not recognise any of his wrong doing. 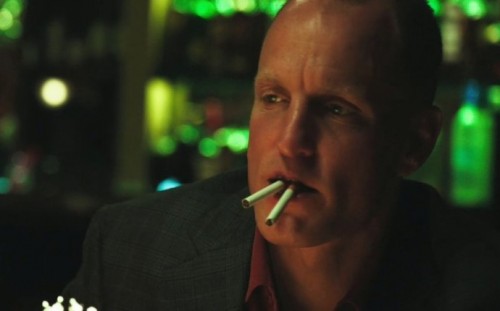 This is the key problem he has with his superiors as they try to make him retire. Brown is at his charismatic best as he explains to Police Councillor Confrey (Sigourney Weaver) that if they try to make him retire they will go to court, wherein he will exploit his Vietnam experience as far as it will go and will end up with his own TV show. Confrey detests his stubbornness but knows that the situation he presents could well be true due to Brown’s force of will. He is a man who continues to live with two sisters; he has a child with each one. He lives between two houses next door to each other desperately trying to keep some semblance of family together, albeit a dysfunctional one. He needs to be in control of every situation. He appears calm but violence bubbles under the surface of this self destructive man.

Moverman’s talent is not unlike that of Wong Kar-Wai in that he creates very vivid memorable images. He lacks the visual ingenuity of the Hong-Kong director but makes up for it a slick style that often mirrors the disturbed characters in his scripts. There is a wonderful serenity throughout his films; the camera meditatively ponders the troubled souls within. He jars us with sudden jolt or a fluid movement. He dizzies his audience when following a discussion between Brown, Confrey and the politician Bill Blago (Steve Buscemi). Revolving the camera sickeningly round the room, the scene lets the audience know what it might feel like being caught in the whirlwind of Brown’s charisma and steadfastness. Another wonderful moment from a director who has stamped his name firmly on the modern day cinematic landscape.

Slow but tense, turgid but revelatory, Moverman may well be cinema at its most frustrating certainly with his latest effort. But where some may turn away in disgust or boredom others will hang around for the brilliance to set in. Rampart will at least intrigue those who are patient enough to follow it through. Moverman has a distinct style that will constantly be refined during his coming features. Let’s hope he and Jeff Nichols continue with the vastly more dynamic cinema they are creating and are not forgotten or worse yet, seduced by the almighty dollar.