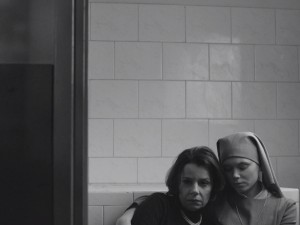 Cinema in 2014 may well be remembered as a year for ambivalent responses to religion. John Michael McDonagh’s Calvary, Dietrich Brugemann’s Stations of the Cross and Andrei Zvyagintsev’s Leviathan all tackle weighty issues head on, and emerge as exceptional pieces of cinema that provide no easy answers. One of the most critically celebrated of the bunch is Pawel Pawlikowski’s Ida, and for good reason. Not only does it address its themes with grace and subtlety, it is also one of the most beautifully shot films of the year, too. As such, its Blu Ray release makes it essential for anyone planning to make a ‘best films of the year’ list and hasn’t yet caught up with this small and perfectly formed story.

Ida is the real name of Anna, a novice in post-war Poland who, shortly before she takes her lifelong vows, meets relative who tells her that she is actually Jewish and was put in a nunnery to protect her from the Nazis. This revelation happens at a liminal moment of her life: the imminent vows to become a nun hang over the entire film as she decides what kind of person she wants to become. Her past and future all revolve around this one decision, with her childhood in an abbey in constant tension with the revelation that the life of solitude and celibacy is one that she could opt out of, and that denies her a crucial part of her heritage. It’s a coming of age story focussed into one crucial decision, and the film lives in the moment before that choice. Agata Trzebuchowska is mesmerising in the central role, but internalises so much of this conflict that it is occasionally hard to find a way in, to grasp what’s going on. It’s mature filmmaking, demanding much of the viewer by forcing their engagement with a distant and detached protagonist.

There, however, is where form comes in, and director Pawlikowski uses the frame – here in 1.375:1 aspect ratio – to externalise the many internal thoughts of the reticent heroine. Certain film makers are big fans of Carl Theodor Dreyer, the director behind Ordet and Day of Wrath, a man famed for austere framing, long takes, and close ups of anguished faces, and many try to homage his visually distinctive style, with varying amounts of success. Ever wondered why Tom Hooper has such wonky framing and is obsessed with close ups? He’s a Dreyer fan, but his imitation often feels clumsy (and this writer is a fan of both Les Miserables and The King’s Speech). Pawlikowski’s style can’t help but recall something like The Passion of Joan of Arc, such is his camera’s fascination with the expressive, affective face of his lead actress. Yet where Dreyer would keep the face front and centre, Pawlikowski shoots Trzebuchowska almost obsessively off centre, showing a world out of rhythm. It’s exquisitely shot in black and white, and when it does cut to a wide shot, the frame is perfectly composed – making you care about the phrase mise-en-scène beyond it being a slightly ‘pretentious’ phrase that reviewers sometimes use. When a film looks and thinks like Ida does, it’s safe to say you haven’t seen anything like it this year.