101 Films are re-releasing the film, released some 8 years back on Blu Ray by Arrow. Yes I said it. I had to say it. Now thats over, we should get to the meat. Ok so we know that a remake is about to hit the screens very, very shortly. That seems to be looking at the content from the eyes of modern fears. In particular the power of genetic engineering. David Cronenberg’s 1977 RABID is far more focused on the fears of that time.  The fear of sex, sexual disease and of the power of sex onscreen. Take also that this was the film which cemented Cronenbergs other fascination. Body horror . Body fluids. Body dismorphia. Body as a device and an object riddled with disease and desire. 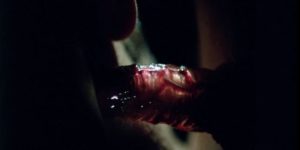 Rose (Marilyn Chambers) and her boyfriend Hart (Frank Moore) are young and reckless. They love to drive fast and in the vast roads of Canada. When they get into a motorcycle accident, it is probably expected. Both are taken to the Keloid Clinic for Plastic Surgery. World renowned and also known for some under the table experimental processes. Hart suffered a number of injuries. Rose is severely burned and injured. Dr. Dan Keloid (Howard Ryshpan) sees an opportunity to help both and decides to perform a radical new procedure on her. One which uses grafts to her chest and abdomen to replace the damaged skin and organs. One month later, Hart is released while Rose remains in a coma. Rose awakens from her coma and screams. Whatever is to happen will start there…. 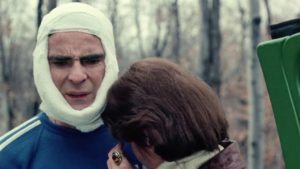 No disc for review here sadly so we have to go with our screening link review.

So the transfer version seems to be on par with the Arrow release. This is to say, its not flat, dull or wet on the screen. there is grain and light but it is a film from the 70s and an indie one at that, so give it a break.

The only extra we got to see is the  The Quiet Revolution. Its well researched, Canuxploitation! is well bridged. This all said its a little dry and a little dull in the end. Maybe just me or maybe just my mindset but its not a return watch of a film or a documnetary.