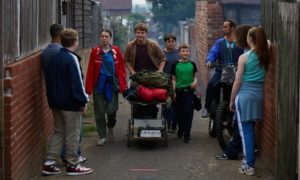 The kitchen sink cinema of the 1960s set a high bar. It was a bold series of cinematic gems. Then as society changed, so did the cienma and the sink mutated into the sink comedy of the 1990s by people like Mike Leigh. This has now become the kitchen comedy, sink drama of the 2000s and 2010s. The films which directly play on the themes of previous British films and the extrapolate a newer take on the country, its people and their destiny. Films like FISHTANK (which was a harder take), MADE IN DAGENHAM (a comedy about trade unionism that played on the kitchen sink but with laughs), CEMENTARY JUNCTION (coming of age, coming of the faucet film) and more. PONDLIFE is an example of this. A British film that takes a some times ironic look at the world of post industrial society in the UK. 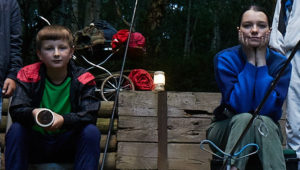 1994. Summer. An ex-mining village in deepest Yorkshire. Trevor (Tom Varey playing a cool as summer breeze) is stuck on his familes sofa. He is also looking to catch the stunning fish, a super sized giant carp hidden in the depths of the local pond. Pogo (Esme Creed-Miles) is in love with him. She is also the local kook and ambles around like a rabbit in the headlights. Malcolm (Angus Imrie) is in love. The object of his love is Cassie (Daisy Edgar-Jones), she however is hooked on someone else. Maurice ( Abraham Lewis) is that person but he is more in love with himself and his hair. When the night draws dark and the pond is still, the local community decide to see if the carp is real or a rumour. Led by Trevor, they embark on a fishing expedition they will never forget. 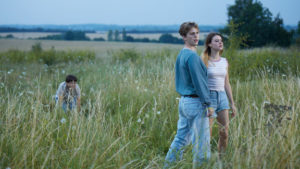 PONDLIFE is not completely fresh, new or revolutionary in its tale of a small town, its people and their broad range of emotional navigations. What PONDLIFE does dynamically is arrange an ensemble series of performances (mostly from soap stars who all seem to sit in the background) with a skillful and simple use of direction. I would like to applaud director Bill Buckhurst and writer Richard Cameron. They have created a world of gentle, wandering warmth. They have then captured that world and (most importantly) paced that world with range and tone. What this does is gives those inhabiting this world, a rich, diverse texture. Their personalities are allowed to breath. You find yourself engrossed in a simple story because of those living in it.