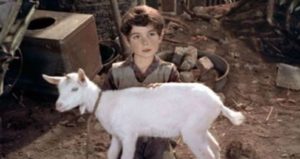 Unlike Carol Reeds OLIVER, which saw the east end at the time of early Jewish settlement. A KID FOR TWO FARTHINGS, Reeds first colour film, is saturated in the sights, smells and sounds of post war east end of London. A place that had a rich Jewish centre of culture and industry. Charting back to the turn of the century, the Jewish community were pivotal to its day to day exsistence. In the decade after the war, this changed slowly. The Jewish community gained financial independence, economic prosperity and relocated to Northern London. Or even more deeper into East London and Essex areas. A KID FOR TWO FARTHINGS catches the moment that the world changed. Through the eyes of a child. New expectations. New hopes. New dreams and older realities. 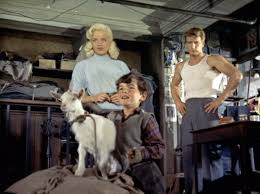 Wholesale tailoring, fruit and veg and service world of London’s East End. A body builder called Sam (Joe Robinson), his girlfriend Sonia (Diana Dors) and small boy Joe (Jonathan Ashmore). Joe is living with his mother (Celia Johnson), above a tailors while his father is away in Africa, looking for work. Joe wants a pet. He has chicks but they die, he wants a pigeon but it wants to avoid him and so he askes local tailor, Kandinsky (David Kossoff ) what can he get that will stay? Kandinsky suggests a unicorn. It will stay, if he treats it well. It will also grant his wishes, through the magic of its horn. The problem is that it can only be found in Africa. Joe believes that maybe his father will send one for him. Then one day Joe buys a unicorn ( which is in fact a sickly little goat), with just one twisted horn in the middle of its forehead. This will bring him good fortune maybe? 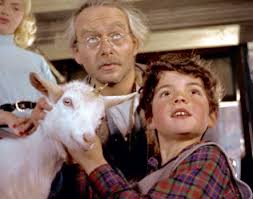 A KID FOR TWO FARTHINGS has a dream like quality. I guess like many films of the period I can connect it too, it is filled with the expectation of the age. Yes we have the kitchen sink films (that Reed’s visual setting plays too this. You get the graveyards, next door to the shops and flats of people. Forget the dirt, forget the rubble.) or the comedies (that place a major fix on the unreal and still timely.) However you also get the bombed out shells. Remember instead the child who lives a life of hope. Pegged on the discovery of a unicorn. Though this mythical figure is sold to him as the creature who can grant him wishes. This was the dream of the age. The dream of making a better life. The slum clearances were in full effect. The redevelopment of the community spaces and community at large. Joe can be seen as the youth of the age, depicted here as the dancing, swinging folk. All being drawn to the milk bars and the dream of independance. 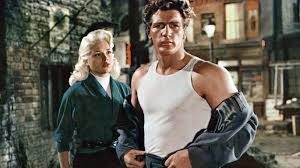 So I have nothing to compare the Blu Ray to but I could certainly define that the HD version is solid. It has a few scenes that have decayed and the image has perished. However the street scenes, market scenes and that lovely dancing scene with the florescent light, is superbly captured.

The top three? Well in order of apperance are the London After the War: the post-war period is evoked in archive films celebrating the city and its people. The on the ground images are revealing. London as a world away from where it is today. With some similarity to today as well. On the Ropes: a strenuous selection of archive films about wrestling and boxing. Boxing components are fantastic. I know some will be drawn to the wrestling but the films are a great series of watches. Sales Pitches: London Street Markets in Archive Film: archive films of Petticoat Lane and London Bridge market. I love a look at the past, markets are a great leveller and the whole of humanity is in attendance for some of the scenes. London Bridge Market is a lovely place to see.