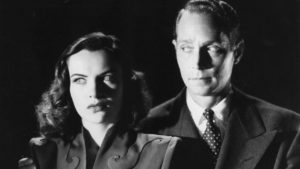 From the director behind THE KILLER and THE DARK MIRROR comes PHANTOM LADY. Scott Henderson (Alan Curtis) is a well liked architect, with a business and a career but his private life is difficult. He is heading over to a bar after another fight with his wife. While drowning his sorrows he strikes up a conversation with a mysterious lady. She was listening to a sad song over and over, he was compelled to ask why. She agrees to accompany him to a show but both withhold names. This is strangers meeting. Nothing more and nothing less. On arriving home, Scott finds two cops at his apartment. His wife has been strangled with one of his neckties and he is the prime suspect. He thought he had a solid alibi. However everyone taht is asked about the lady and Scott, denies seeing him. When Scott is charged with murdering his wife, it falls to his devoted secretary ‘Kansas’ (Ella Raines) to find the phantom lady and save Scott from the electric chair… 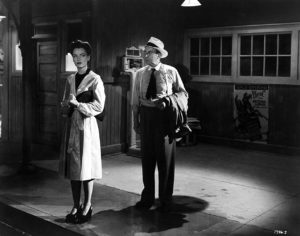 Robert Siodmak directed PHANTOM LADY (1944). Two years before he made three of his best films THE KILLER, SPIRAL STAIRCASE and THE DARK MIRROR. PHANTOM LADY is not only a direct precursor to these in terms of style, form and function. Yes it is in the DNA of his later, greater work but it is also rich enough to hold up on its own. Siodmak takes an unremarkable story, a solid cast and a workable budget to constructs a worthwhile film. Though entrenched in its genre, you get enough creativity in its execution. From the glorious sets that often feels deeply expressionist in apperance. To that stunning narrative visual space. This allows the story to tell itself, with ease. The holding of images and frames, which are intriguing to explore but also immediate and imperative to our understanding of the exposition. The cinematography plays with stark lighting in various interesting ways. Then finally you have that ever progressing, unsetteling fear of when will they know what we do. All in all, though the story is implausable and erratic in its complexity, the film is a stunning work of film form and film making. 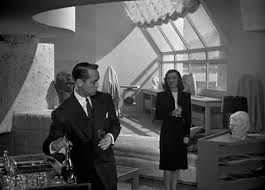 Well the 1080p is a bit better than the DVD which did the rounds. However the stock was well cared for, so the transfer suffers from none of that wear and damage expected. The soundtrack is lovely. It hums and feel bass notes of words and noises.

Dark and Deadly: 50 Years of Film Noir is the best extra on the disc. Forget about the fact it speaks to some of the faces of the films and the genre. That is not good enough. It also introduces new films that are well worth searching out.