The video nasty classic Xtro, makes for an odd experience. British made and seemingly an ET monster movie, what you have in the end is a merge of different genres, themes and films from the past. Father Sam Phillips and his son Tony are playing outside their farm when he disappears in a flash of light. Three years later and a half-human, half-alien being appears in woodlands near London. The being kills three people and impregnates a woman living on an isolated farm. Her belly splits open and she gives birth to a fully formed  Sam. Now Sam wants to return home to find his wife and child. However they have moved on. She has a new lover and Tony has only nightmares to keep him awake.

It has its fans. That is what Xtro has to keep the momentum going. These fans see it for what it is. A cheaper film made in Britain, to jump on the popularity of other better (and better known) films. Xtro feels like a series of film trends, cut together with an eye for sardonic send up. It is a bunch of ideas that are thrown together and left to merge, unhappily.  It is due to this, that it could be confusing to the inexperienced eye. Feeling unsure as to what film they are watching. Confused by the thematic triggers that are not present. My own opinion is that this film needs to be allowed time to flow. Let the film simply run, let it play and as you cross genres you go with it. Then you might enjoy it for what it is. 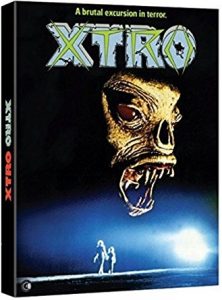 The disc and the restoration on the Blu Ray is nice. It feels at times as if the light levels are very off. The dark sequences are very dark. The light sequences are overly drenched.  Xploring Xtro is the best extra of the bunch. It explores the ideas mentioned above but also lets Harry Bromley-Davenport discuss his film making style.