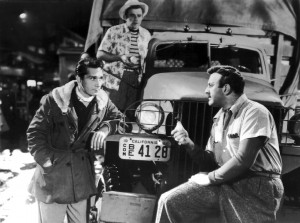 Nick Gracos has just come back from the merchant ships. He spent much time away due to the war and is now ready to settle down and get on with his life. This is until he finds out his father has been crippled by a horrid accident while delivering fruit. The problem is, it seems that the accident was less accident and more a vicious way to get out of paying for the load his father delivered. Now Nick wants revenge and make a few quick bucks in the meanwhile getting it. He teams up with a duffer called Ed and they haul a load of fresh golden apples over to the same place that stole from his father. Revenege might have never been sweeter?

Film noir Dassin style was always a little sour and a little dark. He saw life like no other. Take Brute Force (also released by the superb Arrow) or Rififi (The best gangster film of the 50s and the best heist film till Thief!). These films have nasty double crosses, shady criminal actions and cops that are sadistic. This film has less cops as sadist more the villian and his co horts as just plan nasty guys. This also makes his films really, really good! 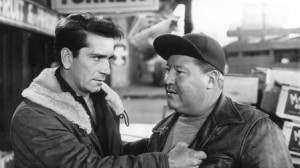 He is one big guy

So what makes this film so good? Well it is in the working out of human nature. The little underhand bargins we do, the nasty little sidelines in sex and violence that often draw people down into a world of vice and sadism. These all float around a world that stinks and Dassin hits them spot on each time. Take for example the calculating that happens between Nick and Ed. You see how even the ‘good’ guys in Noir are little more than scum bags with shine. They stalk each other and want to do over the other. There is no nice, gentle feeling. They know that one is out to take and the other is set to lose. This is unlike much of the output from the era. Yes  Noir had its nasty and no real nice guys but they always got something out of it. Even if it was a moral message. Here we have no moral only, you are as bad or as good as the other guy. Do not kid yourself buddy…

So to the disc and a round of applause to arrow for keeping up the superb work.The restoration looks amazing (Thumbs up Fox!)  The hauling doc about the writer is so informative and great to watch as an interest or as a side to the film. The commentary on scenes are well researched and the booklet is sublime!

Optional English subtitles for the deaf and hard of hearing