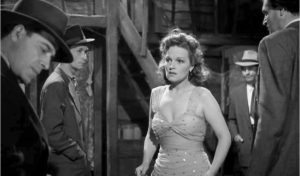 Enter sensationalist headline here ‘THE MOST CENSORED FILM OF ALL TIME…’ ‘ THE WORST FILM OF ALL TIME’ or ‘THE FILM SO CONTROVERSIAL, MPS PETITIONED TO BAN IT’. Yep its the film that launched a thousand web searches, a hundred library visits and a few people watching NO ORCHIDS FOR MISS BLANDISH. A British film, that shamelessly exploited the craze for American gangster films (I think it would be a bity much to say this is a film noir homage.) In reading the booklets collection of critical press from the period, I think that the bods were wise to this (see what I did there). With pseudo-American accents the cast literally battle their way through a script laden with suggestive dialogue. All the women are sluts and most of the men vicious murderers.  Robert Murphy also discusses the films critical history with Orwell idea on the source material! Well that sums up NO ORCHIDS FOR MISS BLANDISH. Now thanks to Indicator, we have a new remaster to enjoy all that absurdity all over again! 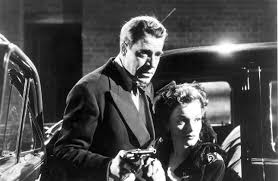 Miss Blandish (Linden Travers) is a rich heiress. This makes her a target for a robbery as it is believed her diamond jewellery worth $100,000 could be easy to get, with the right incentives. The robbery is botched. Riley (Richard Nielson) kills her bridegroom and the three robbers kidnap Miss Blandish for a ransom. Her father is a very rich man and he will pay to get her back. At least that is what should happen….Oh god I cants even finish this without screaming to your dear reader to ignore all of this and simply watch it for these reasons. What actually happens is a series of convulted tussles. A script that is filled with contrived verbage of a gangster film written by a semi deaf idiot, then we have actors from the British screen, donning awful US accents and wielding guns like they would wield cricket bats.

The direction favours a lot of this absurdity. Never quite reigning in the beast and also never wanting to make it seem anything other then a dose of a yet undiscovered STI. Now all is not lost, if you keep this in mind. As I feel Indicator have. James Hadley Chase piece in the booklet seemingly takes a sardonic hue to his work but still serious enough to value that all of the above was hard to put on screen in the first place thanks to censorship and taste. 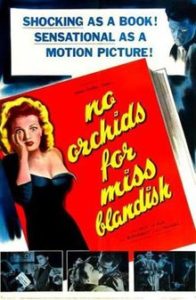 The HD remaster from source, would not surprise you. The DVD version was clean enough and this ups that anty. However lacking the film is, it looks good enough projected on a screen. The original mono sadly allows for all those accented clangers to rise up and sit on the surface like a turd.

Righto. Miss Blandish and the Censor (2019, 42 mins) is the best feature on the disc bar none. Richard Falcon discusses with a vigour and energy that matches my interest in the censorship subject. He covers the novel history (as did Robert Murphy in his essay) but then begins to extract much of the inspirations of James Hadley Chase. The success of the source novel, how that greenlit a film and then the BBFC stance (though all paperwork is lost.) Soldier, Sailor is a welcomed addition to the disc as well. Thanks to the IWM, it is St John L Clowes redemption film (in that it proves he was a better director than Blandish suggests.) Michael Brooke writes on the film, explaining the MOP use of docu drama films to promote service men and the services. Also then exploring the shooting of the film in two parts.