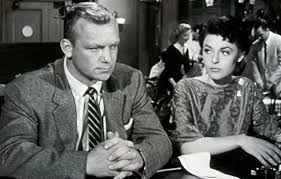 Jacques Tourneur was one of the greatest genre film makers of all time. Bah you say. Forget you I say. Exhibit A is CAT PEOPLE. Yep. Stone cold masterpiece. Starting to get convinced? No. Well then what about Exhibit B? OUT OF THE PAST. Wait you like that but what about something else? Exhibit C and NIGHT OF THE DEMON. Almost convinced. Ok. Try Exhibit D, NIGHTFALL. Its far from his best work. It has a broody soul and has villians that sling threats at everyone. 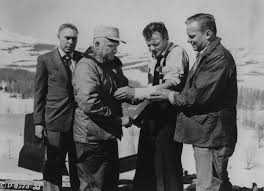 Even each other. A Noir that feels like a sock em type of hod movie. It has a lusty Anne Bancroft, in shimmer and sex eyes. Aldo Ray plays as a smub called Jim Vanning. He was in the wrong place at the right time. The snowy mountains of Montana. Two scum bag hoods turned up. One injured and he and his doctor pal helped. Foolish move. Noe the docs dead and Jim. Well this sucker is for it and no messing. The two hoods left him for dead and they left their loot also. He ran and ran and ran. The dough was hid somewhere along the way. But where? 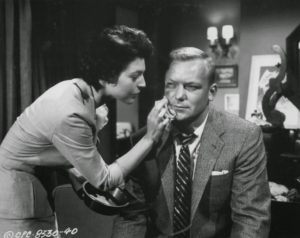 Great work takes time and contemplation. Fuck it does if you go by Tourneur cranking them out film ethic. He not only knocked them out, he made them brilliant. Made the same year as NIGHT OF THE DEMON, it was successful and lovingly shot in the wilds of the US (also sparingly). The HD presentation adds the hues of chiaroscuro lighting but is a little blown out in the snows. This is to be expected. Grain and its chemistry are well known for a transfer issue. I doubt however, you will find an easier sell or a harder pass this year. NIGHTFALL is a must have on disc. You know you want this and I guess so did the producers. Well thats that. Oh wait. The discs extras. Philip Kemp in his appreciation suggests all manner of reasons to want and covert this film. Much of it is a shining beckon to joy but i prefer the moments of clarity and thought. The film was and is timely. An appreciation which holds the film up to legend and legitimacy and comes down on the side of good old fashioned respect. For it is a great film that is on the list of a great director. Bryan Reesman notes how hard going it was but Tourneur achieved a delightful pairing. Convention and control seem to be the reason for much of this. Or at least that is Reesman’s take. Kat Ellinger is usually exemplary but I was not taken with her piece here.