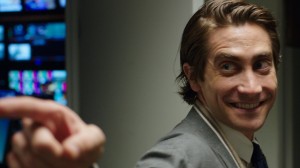 Nightcrawler is one of the most intense, terrifying pieces of cinema in the last decade – that much is clear from the start. Dan Gilroy has written and directed a special feat in storytelling, matched perfectly with stunning visuals and a cast of hugely talented actors lead by Jake Gyllenhaal (who has reached that career best hype). Carefully and masterfully blurring the boundaries between a crime drama, psychological thriller and satire on the American news industry, Gilroy has no intention whatsoever in giving his audience a straightforward pathway into this piece and instead throws them in helplessly to the pack of wolves.

Gyllenhaal plays Lou, who can lie about pretty much anything to anyone and manages to get away with it. Think Leo DiCaprio in Catch Me If You Can but you know, with murdering eyes and crazy face (like if you don’t believe him, he’d probably kill you). On a late night, when wandering through the city, he comes across an accident on a highway. As quick as lightening, a freelance filming crew turns up headed by Joe (Bill Paxton) (these are ‘night crawlers’), gets as close as physically possible to the pain and suffering of someone else, films them (probably not in accordance with the police who are quick to kick them out) before calling the local news channels and selling to the highest bidder. Of course this seems like a good idea to Lou, who wants a slice of the action. Before long, he has a camera, hacked police radio and is following around crimes in town. He has a fellow ‘intern’, Rick (Riz Ahmed) that he can easily take advantage of and a good thing going with local channel executive, Nina (Rene Russo), but the limitations of their relationship blur when Lou talks about sex.

Before long, Gilroy pushes and pushes his characters until they find themselves going to extreme lengths to witness crimes and forces the audience to question how much they are actually taking part in the crimes as well. Nina has 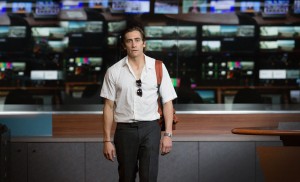 made it clear to Lou that the best news is most often that, which affects white, middle to upper class citizens of the area. A robbery, car jacking, murder, these are all steps to climb for Lou but soon he starts to tamper with evidence, he gets involved in the scenes themselves to make them look better on screen – possibly more dramatic. He gets to scenes before the police do and are gone before they arrive, he causes shootouts, just so that he can get those amazing images.

This is storytelling at it’s very best; literally bringing the audience to the edge of their seat, Gilroy is constantly questioning the moral obligations of the news itself and the lengths people are willing to go to, to get themselves noticed. In terms of his technical skill, Gilroy shows off an immaculate image constantly under the threat of violence and something dark bubbling under the surface. He captures the city of LA at night (and often during the day) in beautiful and daring ways. Not worried about shying away from the places that people know in LA and instead admiring the roads and the lights; melting together the sets and the scenes in a luscious mash. A hint of Drive, but also something so very original in its own right. 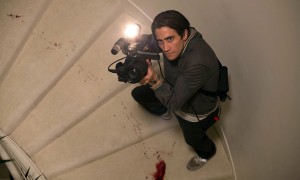 Plus the entire cast are really at the top of their game, complementing the scenes with delicate and carefully thought through chemistry and choreography – but the lengths that Gyllenhaal went to for this role are extraordinary. He has lost a lot of weight and manages to mould himself into a crazy man, almost unrecognisable from his usual look. His eyes bulge, his cheeks fall into themselves and his body contorts and moves freakishly on screen. He is immaculate. His scenes with both Russo and Ahmed are incredible; always oscillating between humour and darkness, always keeping the audience thrilled and dumbfounded.

Worthy of the hyperbole around it, Nightcrawler is a film to be reckoned with and something unforgettable.