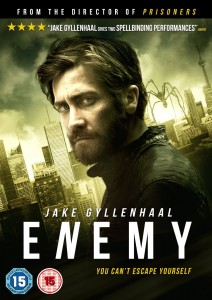 Directed by Denis Villenueve (Prisoners) and starring Oscar-nominee Jake Gyllenhaal (Nightcrawler, Donnie Darko), Enemy is a mesmerising psychological thriller based on the novel ‘The Double’ by Nobel laureate José Saramago.

Jake Gyllenhaal plays Adam, a university lecturer nearing the end of his relationship with girlfriend Mary (Mélanie Laurent). One night, while watching a film, Adam spots a minor actor who looks just like him. Consumed by the desire to meet his double, Adam tracks down the actor and engages him in a complex and dangerous struggle…

Dark, gripping and pulsating with atmosphere, Enemy is a haunting and provocative psychosexual thriller that has drawn comparisons to both Lynch and Cronenberg.

We have three copies of Enemy on DVD to give away.

Which film has Jake Gyllenhaal previously worked on with director, Denis Villenueve?