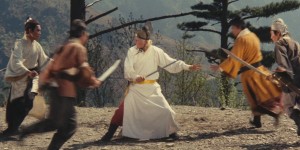 The King is dead…. His Eunuch Tsao is now in charge. Beating his only real opponent General Yu by having him beheaded. Then he had the kings children exiled from China. Tsao is worried of repocussions and decides to have the children killed by his secret army. The ambush is set for the Dragon Inn, a grim and dreary space filled with decaying wood and surrounded by wet fields. The secret police take control of the Inn and kill almost all of the staff. Then Hsiao, a martial arts expert arrives at the inn to meet his friend the innkeeper . The secret police now have a problem as the innkeeper, Wu Ning, was general Yu loyal lieutenants and has summoned Hsiao to help the children. A brother-sister martial-artist team (children of another Yu lieutenant) arrive as well. Now the battle to save the family and stop the evil plan, will begin. 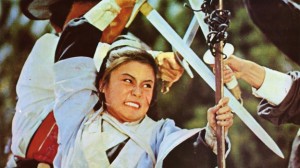 Do I like Chinese / Taiwanese action films? Some but not many in truth. They often have too much in the way of magical fantasy and bland fighting. Often linked by narratives that are empty and dull. This has all of that but it is also a masterwork of intellegent camera work, direction and film as escapism. Its use of camera is excellent. This coupled with its visceral blood splatter is refreshing. I loved the exploration of the Inn and how it become hostile. It becomes like a haunted house with murder and mania creeping. The enemy stalk around and play it like they are evil spirits, the good guys play it like they are the angels. Then the camera plays it like the minds restless eye. Flitting around the world and the space with such energy. This is 1967 and it is a great thing to see. For a film that has obvious nods to both exploitation cinema and American westerns, this adds an additional and very fresh element. 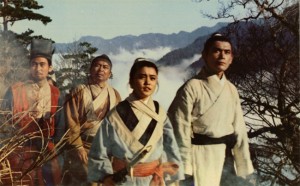 So the Blu ray and DVD….Well done Masters of Cinema. Well done indeed. They are to be applauded as the film looks marvellous and new. Restored by a caring balance and restoration.The 1080 on the Blu looks amazing…. The extras are ok but the film is so good you will love it just for that.