Welcome to Paris. Early 20th century. Before the war.
Take a ride with me on this merry-go-round, Francois Truffaut seems to say, the opening sequences here a bravura display of editing and narration to create the city as circus. Here is a story of two men (Jules and Jim) and one woman (Catherine). Early on Jules et Jim pre-empts Godard’s Bande a Parte with it’s love triangle and in the playfulness on show in front and behind the camera. 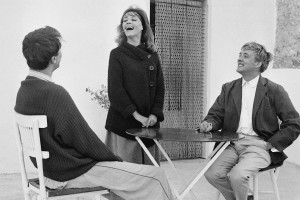 The use of stock footage to fill gaps fits into this tone. It’s part of a refreshingly flip attitude to period drama – a genre that often becomes more about frills than thrills. These three aren’t characters from history but simply three modern people in a world from the past.

We follow these free spirits driven by Catherine’s lust for life but interrupted by the war. Separated by conflict, love pulls them together. That sounds sentimental and perhaps it’s where the problem lies. For there is a disconnect here between the director and his material (a book by Henri-Pierre Roché).

As it goes on the cracks start to show. You find yourself caring less and less – Jules is simply a sad sack, Catherine (although brilliantly played by Jeanne Moreau) becomes infuriatingly self-centred, and Jim is little more than a nose on legs – first with a moustache and then without.

Perhaps Truffaut should have stopped shooting halfway through this story and picked it up at a later date when his world weariness could match his characters post war selves. As it is Jules et Jim limps towards it’s conclusion as if weighed down by period dramas of the past.