A crowded tube carriage shakes passengers to and fro. We witness strangers forced together, the politics of the vacant seat, and the ping-pong of covert glances that come with silent flirting.

Some things don’t change; this is the opening of Anthony Asquith’s 1928 silent film Underground. This is the birth of modern London, a city charged by automation and the relentless flow of workers. Amongst these drones are our protagonists Nell, Bill, Kate and Bert who fall victim to chance, love, and the city itself. 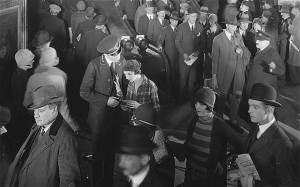 A painstaking restoration (and reconstruction) means we can now experience Underground in its original glory with the addition of a new score by silent film aficionado Neil Brand.

This is a hymn to the dawn of the Underground, to electricity, and to a charged urban existence. Brand’s score embraces this. He creates a bold, propulsive accompaniment that seems to drive the characters from within. It’s as if the drug of the city has infected them, poisoning romance and turning love to jealous rage. Brand’s score moves deftly between styles at times echoing the feeling of Gershwin in Woody Allen’s Manhattan at other points reflecting the drive and action on screen with percussive power.

The direction bears similarities with Asquith’s contemporary, Alfred Hitchcock. Both had early exposure to the German film industry and embraced its expressionistic techniques. Given the same material you feel that Hitchcock would have confined all action within the underground system, upping tension and conflict within the tunnels. Yet Asquith’s approach is to show his characters full existence: at home; in a smoky pub; on a bus ride by the river Thames. All this serves to add a texture and lyricism that still feels fresh. The acting, although sometimes heightened, is strong throughout to give depth to a very simple story of unrequited love.

The technical risks Asquith takes are startling but always effective. In fact the further he pushes the style the stronger the film gets with bold use of point of view and double exposure adding vividness to his vision. The climax is especially successful in creating an impressionistic vortex of images around the Lots Road Power Station.

This is not as great an achievement as Asquith’s later silent thriller A Cottage On Dartmoor but it is a bold and full picture of city life that takes risks that’ll still excite any weary commuter.

‘Underground’ is released on 11 January 2013 at the BFI Southbank and selected cinemas nationwide.