The young upstart is no more. An ageing Jean-Luc Godard sits before us his grey hairs rendered in the unflattering colours of analogue video. The 1960s are gone and with it the old machinery. The familiar cigar is still wedged in the director’s mouth but the typewriter is now electric and its exclamations are printed with robotic noise that punctuate these episodes like moronic morse code. 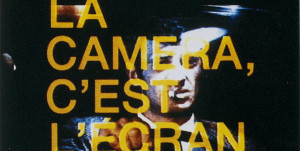 Histoire(s) du Cinéma could translate as the history of cinema or story of cinema. But this is no objective study, it is an entirely personal, idiosyncratic series Godard made through the 1980s and 90s.

Comprised of eight video essays this is perhaps Godard’s most ambitious work with a total running time of 266 minutes and its subject no less sprawling than the history of the world and cinema over the past 100 years.

It comes across as a 20th Century dream mixing real horror and sex with the fantasies of the silver screen and everyday banalities. Godard combines archive footage with video diaries, countless stills and samples of films by himself, his contemporaries and the masters of the past. This is a fever of video mixing that feels just as direct as the authors seminal 60s work.

Godard freely intercuts footage of genocide with pornography. Low grade captures from classic films jerk and freeze before our eyes. Frozen filmmakers watch on: Von Stroheim, Eisenstein, Chaplin. We get a recurring still from Ingmar Bergman’s Prison, a young couple stare out at us, enraptured by projected celluloid. 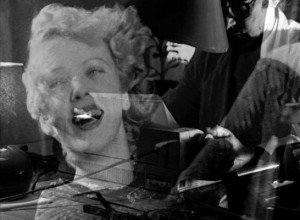 Text appears often. Whereas the imagery has been degraded the text is bought to life through animation and repetition. This mix of cinematic collage and titles will be familiar for those who saw Guy Maddin’s The Forbidden Room. Where Maddin overloaded his concoction with plot Godard largely ignores narrative with his use of screen text more intellectual puzzle than bizarre declaration. They do both feature the word “derriere” but Maddin holds the trump card here with his accompanying Sparks musical number.

Just as Histoire(s) du Cinéma lacks the humour of The Forbidden Room other comparisons fail to flatter: For an essay film that examines the nature of cinema look no further than Orson Welles’ virtuoso F for Fake; For a primer on a century of cinema Mark Cousins The Story of Film: An Odyssey is an eye-opening inspiration.

But who said Godard was here to entertain? He likes to toy with an audience, to show off, to bore, to surprise. Godard can’t resist quoting philosophers, poets, novelists as if this will add to his own lustre. For those who aren’t French intellectuals much will pass you by. Even the English subtitles are often omitted, just another way to confound his idle audience. 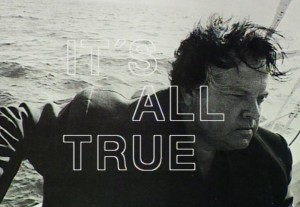 As in a dream much is unintelligible and easily forgotten but there are moments that resonate. One episode stands out. Here Godard reveals himself, unadorned, for two passionate diatribes. Firstly he castigates the brutality of European countries who act like corrupt individuals with no empathy for their citizens. Later he describes the cinematic landscape in the aftermath of World War Two. He’s typically provocative in his belief that the only European cinema that emerged well was in Italy where Neo-realism presented a fresh and vital approach. The series intertwines fact and fiction so tightly it is never clear if it is the films that have reflected life or the other way round.

So what do filmmakers dream of? Just the same as the rest of us: filth and horror and distorted memories. When consciousness returns there’s the same question, “What does is all mean?” Godard doesn’t know either, but that doesn’t stop him from dreaming.