Director Julien Temple has spent much of his career chronicling the music and people of this odd isle with a succession of bold and brilliant documentaries such as London: The Modern Babylon and The Filth and the Fury. Here we see the roots of those twin passions in a grand love letter to the birth of the British teenager, to a time when life burst into Technicolor and London was a melting pot impossible to ignore.

Absolute Beginners is that rare thing: a British musical. It could also be considered a directors folly, sitting somewhere between Scorsese’s New York, New York and Walter Hill’s Streets of Fire. You have to admire the chutzpah of Temple (making just his second feature here after Sex Pistols film The Great Rock ‘n’ Roll Swindle) along with young producers Nik Powell and Stephen Woolley. This is a huge undertaking featuring elaborate sets of vintage Soho, a sweeping story of British tribes, urban unrest and artistic ideals backed by a host of musical talent. 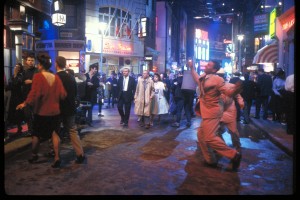 Unfortunately the false notes ring out. The approach is broad and the world stylised but the characters fall flat. Our lead, Colin, is as exciting as his name and Eddie O’Connell‘s performance lacks the oomph to make us sit up and take notice. We never find ourselves caring for the hero and there is an abject failure to create any sort of believable relationships. While the set-pieces are effective (as you’d expect from music video veteran Temple) the music itself just doesn’t stand up. The decision to give everything a jazz inflection shifts the songs from the 1958 setting into 1985 awfulness.

The story is also somewhat cack-handed; on the one hand we have Colin pursuing the girl of his dreams by selling out his photographic talent and on the other racial tensions become amplified by money and politics leading to violence on the streets. The later of these is far more interesting and works better with the themes of a changing London and new music. If this had been the focus and the romance had spanned the racial divide it may have held together better.

This was a compromised movie and it’s production history is as interesting and colourful as anything up on screen. There is technical virtuosity here and it stays with you: Ray Davies in his cross-sectioned house, David Bowie on a giant typewriter, the camera swooping through the neon lit and rain soaked Soho streets. But ambition and talent aren’t always enough.

Absolute Beginners is an oddity that had the guts to scream from the rooftops. Insistent in its brashness, often one-note, baffling, incoherent but with the potential to soar. Perhaps it represents teenagers perfectly after all.

‘Absolute Beginners’ is out now on Blu-Ray and DVD