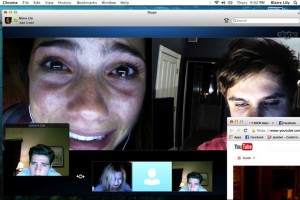 Leo Gabriadze’s Unfriended is an exciting, terrifying, suspense filled ride through social media and a forerunner, promising change to the horror genre. Whilst many attempts have been made in the past to create horror films around the internet, few have wholly successfully hit the proverbial nail on the head and tapped into the inherent fears of online users around the world. Films including Fear Dot Com, Chatroom and The Den (which was an incredibly gratifying experience in its own right) have pathed the way for a film like Unfriended to exist. Produced by Timur Bekmambetov (the director of Night Watch and Wanted) and Jason Blum (who has produced many of the most famous horror series of the last decade including Paranormal Activity, Insidious and The Purge), Unfriended has so brilliantly understood the world that it takes place within and pushes it to such an extreme; Unfriended is one of the scariest films of the year.

The entirety of Unfriended takes place within one girl’s computer screen, Blaire (Shelley Hennig), who listens to music on Spotify, checks her Facebook, chats with her friends on Skype, watches videos on YouTube and iMessages her boyfriend, Mitch (Moses Storm). The first thing to bear in mind about Unfriended, something that puts it far ahead of other films is that these websites and applications have given permission for their names to be used during the film. All the windows on screen appear exactly as they would for the normal user sitting in the audience and these are all within a Mac computer screen, which many of the audience will be aware of. This is important to note because usually these applications are all simply alluded to – they could look similar and have slightly adapted names but they often have changes so that films don’t have to pay for permission. Therefore, right away, Unfriended is positioning itself as set within the audiences world – the characters of the film use the same things that the audience would and therefore this potentially makes the story appear to be more real than other attempts. 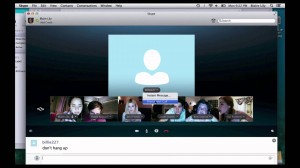 take off her panties and top. As the audience are watching this totally on the Skype windows, Gabriadze and his crew are telling the audience from the top that this is going to be a difference experience of cinema and of filmmaking and that all audience expectations are going to be subverted throughout. This is key to understanding Unfriended; the entire film is a subversion of what the audience may be expecting. As traditionally thought within filmmaking, the close up is an interesting and very intimate shot of a character – this usually occurs when the audience have come to know a character or for emphasis for one reason or another but as with anyone that has had a Skype conversation, you are always pretty close up to the camera and your face usually takes up the whole screen. Therefore the audience are once again being brought in right away to get to know these characters intimately. Soon, the rest of Blaire and Mitch’s friends join them on a Skype conversation but mysteriously there is a troll there, without a face and keeping very quiet. No one can get rid of the person and they have no idea how they got there in the first place.

In between moments, the film starts to seep back story through to the audience via different windows. A video on Live Leaks of a girl, Laura Barns (Heather Sossaman) committing suicide a year before is shown and this is followed up by another video on YouTube of Laura at a party sometime before – she is drunk, falling about and making a fool of herself. The title of the video says ‘LAURA BARNS KILL URSELF.’ Pretty quickly the fun begins as Laura’s Facebook account private messages Blaire to ask what she is up to. Mitch says the same thing happened to him. Still the group are unsure who the random unknown person on the call is. Blaire replies back to the mysterious message from the dead girl but she wonders whether someone has hacked the account and is playing a joke. As the film goes on, secrets are revealed and the dead girl, it appears, is the one playing the joke. She wants to play games with all those in on the conversation and as this is a horror film it’s most likely these guys are going to end up dead. 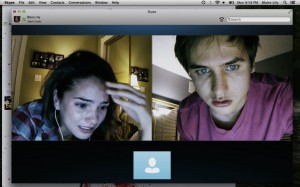 The most fascinating thing about Unfriended is the simplicity of the film; a dead girl haunting but it’s the incredible way that the computer screen is utilised and manipulated to create something truly scary, gripping and so very very tense. The film plays with themes of voyeurism to an extreme degree; the audience are forced into a position where they are unsure who is good and bad anymore and this ditching of the dichotomy is something, which highlights the brilliant script of the film. Whilst freaky and fun, Unfriended also is aware that it is talking about something serious and often discussed in society; teen suicide and the impact of social media on the welfare of users. But as in the past, it is often horror that openly confronts debated issues and seems to put a window (literally and metaphorically) between the audience and the matter itself.

There is no reason why Unfriended shouldn’t go down as innovative and unique but also a powerful and evocative horror film, which will hopefully help cement this new kind of filmmaking.