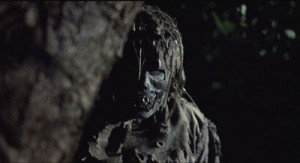 After a botched robbery sends a group of military types into the fields of mid west America, they have to regroup and reclaim their stolen cash. Issues start early when the group are sent to an abandoned house instead of a pick up point for the money. Then the mysterious sounds and movements in the fields, bushes and trees make the group nervous. The group have also lost the tracking beacon that might have meant the money would have been easier to find and quicker. Then finally is the sense of unease that is creeping around them as the group attempts to take their money back and one by one they disappears… 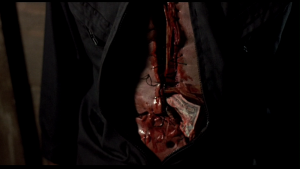 Low budget gems or great films aren’t ten a penny. They are so rare as hens teeth to find. This film is a stand out gem but one that has many, many flaws. I say this because I know how many feel about these lower budget films. This film is a zombie, slasher, violent horror film. The feeling with many is that they are poorly produced, weak scripted and empty in value. We should value these films because they show cinema as ambition for the film maker and film creation groups.Ambition is a real challenge for many film makers to have, it is hard to want to do something that you know is impossible or at least improbable. There is more however, it is also a challenge for the viewer who has to invest and involve in a film that is outside expectation. 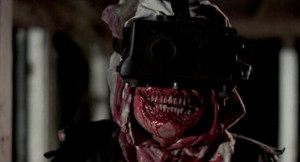 This film should be seen and be seen as a simple action film produced by a film loving group, that know what an audience want and sets up and pays off on that. It has low budget visual effects, by numbers story and not constructed as a thought inducing piece. It is an action adventure and 88 films have given it a better visual treatment than the US dvd. The Blu ray is also filled with good extras, the best is the booklet and the Field of Screams doc. I compel you to do what is right and buy this!